A PERFECT DAY: IN MARGATE WITH KIDS 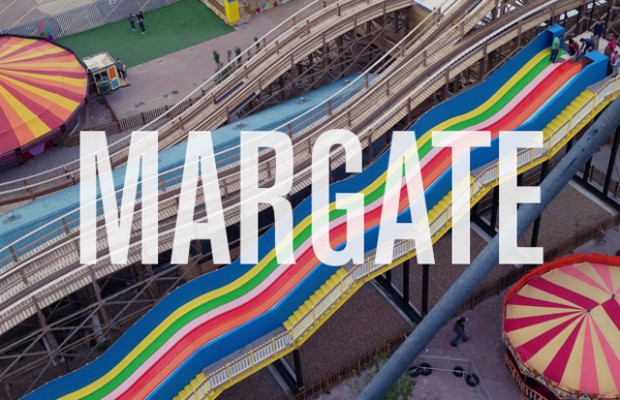 We’ve done Tokyo and Brixton, the next stop in our (eclectic) Perfect Day tour is the quintessential British seaside town of Margate – on the Kent coast just an hour and a half from London. The town has enjoyed a trendy renaissance since the Turner Contemporary gallery opened in 2011, then Dreamland earlier this year. But these aren’t the only attractions. If you’re looking for a nice summer day trip from London, this is a great day out.

The first thing I learned about Margate is that if you tell an English person older than 35 you’re going there, they will break into song thanks to Chas and Dave. Then you’ll find out that you’ve been pronouncing it wrong. It’s apparently “Maar-git”, although you’ll sound like a twat saying it like that. So try to avoid it altogether.

START WITH HIGH CULTURE AND WORK YOUR WAY DOWN 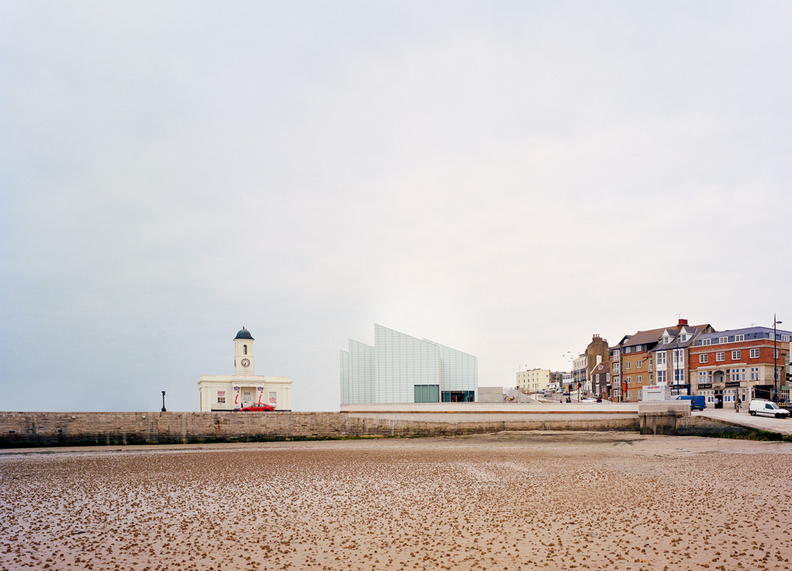 Start your day at The Turner Contemporary Gallery at the North West end of the sea front.  If you have arrived by train, walk along Station Approach Rd to the seafront and you’ll see it at the other end of the beach. If you’re driving, there is parking around it along the Harbour wall and in the surrounding streets. Admission is free.

The Turner Contemporary Gallery was opened in 2011 by Tracey Emin, who grew up in Margate. Her work I Never Stopped Loving You can be seen on the facade of Droit House, which is next to the main gallery in her signature pink neon.

“It’s a declaration of love for Margate from me, but also what I want in the summer – why go to Brighton for a dirty weekend – come to Margate. I want people to come off the train, I want them to walk along the seafront, I want them to hold hands and to have a snog and say ‘I never stopped loving you’.”

The building itself was designed by David Chipperfield Architects and stands as a sort of fortress to culture at the end of the beach. The sun was out when we were there, but I imagine on a blustery day from one of Turner’s paintings, its bright white walls and steel construction give a hearty ‘F*** You!’ to the elements – just like one of Chas n Dave’s old boys on a day out. 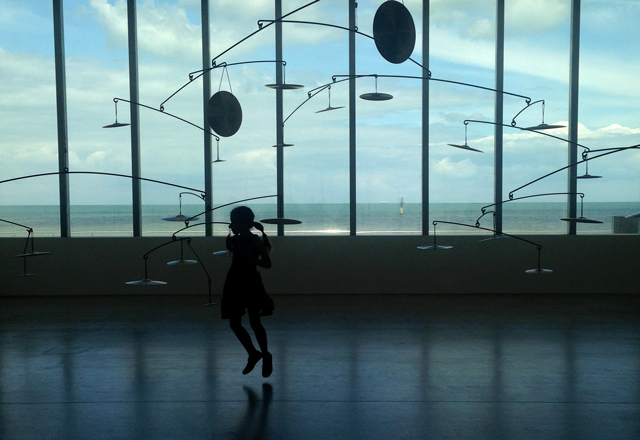 We saw a Grayson Perry’s Provincial Punk exhibition, which was fantastic, as well as an installation by Mexican artist Carlos Amorales, We Will See How Everything Reverberates (2012), which is a kid’s dream. It’s a giant mobile made of cymbals that you can play four times a day. (Check their website for playing times) Kaboom tish!

LUNCH AT THE GALLERY CAFE 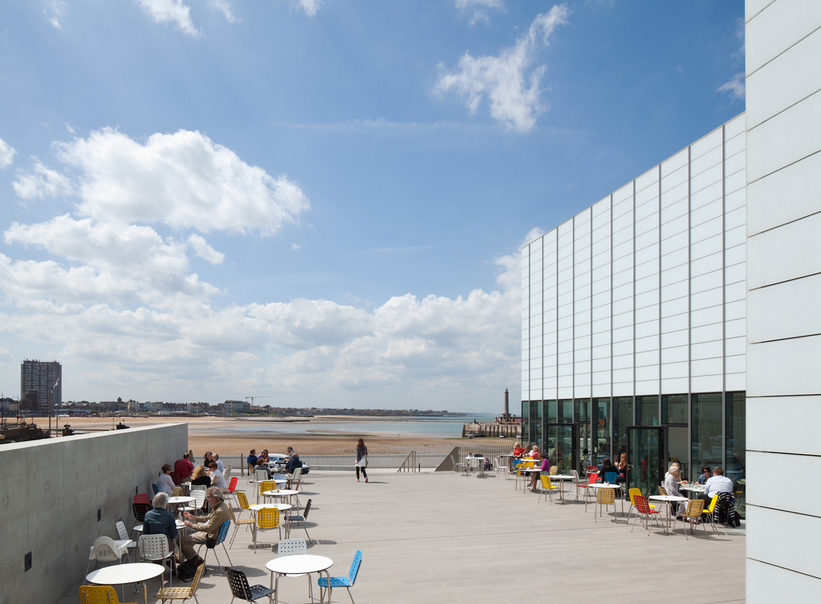 The cafe is on the ground floor near the main entrance to the gallery.

Obviously the other option is good old seaside fish ‘n’ chips, but we couldn’t go past the rare roast beef and celeriac remoulade open sandwich. Or the smoked trout, shaved fennel, cucumber, apple and rocket salad. There are kids’ meals too for £4.95 as well as high chairs, decent coffee and a view of the sea. Everyone wins.

VINTAGE SHOPPING IN THE OLD TOWN 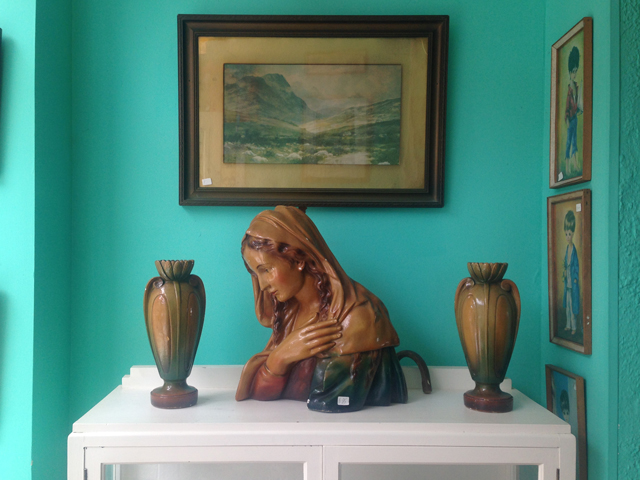 As you leave the Turner Contemporary, walk back along the sea front and turn left into King Street. From here wonder the lanes around Fort Street, Mansion Street and Alkali Row for some excellent vintage finds.

There are some fabulous vintage shops around these streets, with shops dedicated to retro furniture, rock-a-billy style, and collections of naval junk with a few old sweet shops and pubs along the way. I spotted a few excellent bargains at Hunkydory on King Street.

A SPOT OF HISTORY AT THE TUDOR HOUSE 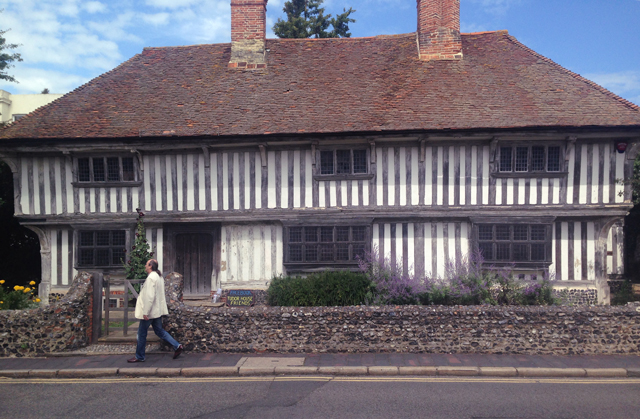 The Old Tudor house, which is one of Margate’s oldest buildings, is a nice bit of proper history. It was built in the first half of the 16th century and would have been considered quite luxurious because it had mod-cons like a chimney and glass windows.

It’s only open on certain days of the week. Check the website, but even if it’s closed, it’s nice to wander past and have a gander.

A DOSE OF ANTIQUE ECCENTRICITY AT THE SHELL GROTTO 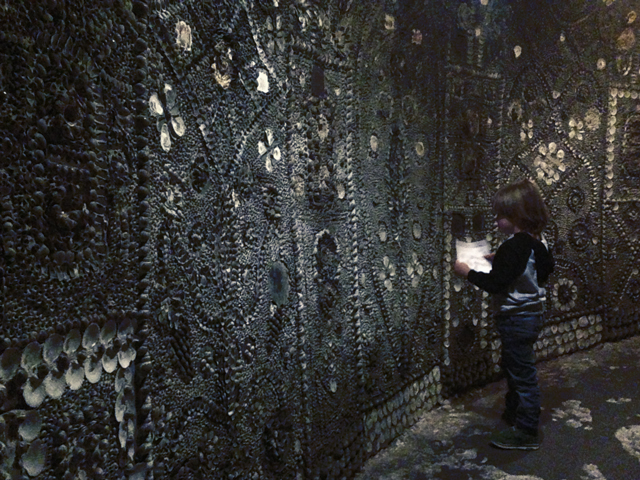 Continue along King Street, which will turn into Dane Road. It’s not the most picturesque walk, but it’s worth it. After five minutes, turn left onto Grotto Hill, The Shell Grotto is on the right. Adults: £3.50, kids £1.50, family of four £8.

Something England does incredibly well is bizarre regional attractions. When you’re on your seaside holiday, odds are that there will be a few days of dodgy weather so these seaside towns always have a few back-up attractions. The Shell Grotto is a lovely example of one of these. Bizarre art? Tick. Kitsch gift shop? Tick. Cream teas? Tick. Wall mounted T-Rex Head made of seashells? Ti…. what? 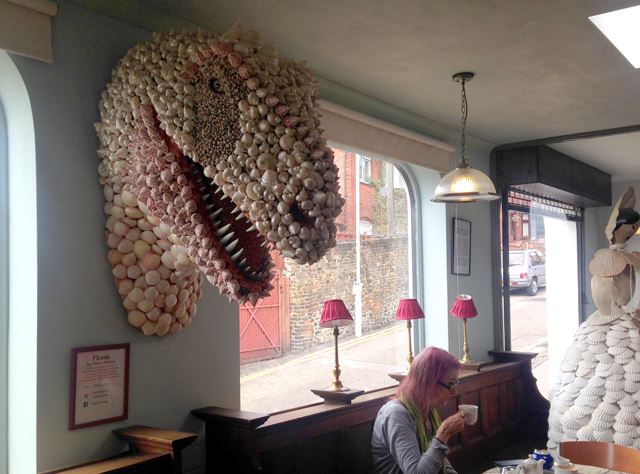 The grotto was discovered in 1835 by some builders who sent a boy down a hole on a rope to investigate a lost shovel. You can imagine their surprise when they found several caves with over 4 million seashells laid out in intricate patterns steeped in mystery.

There are a few theories about its history: it is likely to be a folly made by a wealthy land owner in the 18th century who had returned from a Continental Grand Tour wishing to recreate a Cretan neo-classical grotto in their back yard. Another theory suggests it may have been a dungeon for the immoral activities and rituals of frisky Georgians. 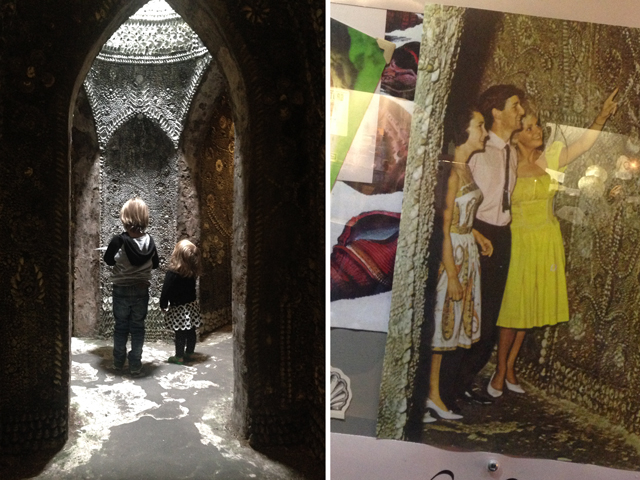 Either way, the kids loved it! My five year old hasn’t stopped talking about it. “It was even better than the T-Rex in the cafe.”  If you’re after a pick-me-up, they also do a great cream tea. 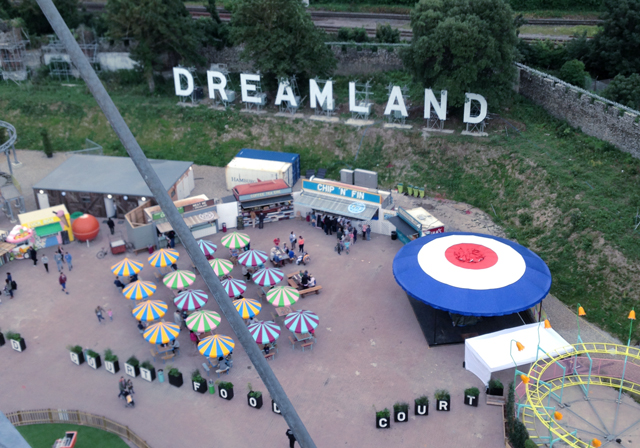 It’s a 12 minute walk back to the seafront where you’ll find the entrance to Dreamland. If you arrive after 5pm Thursday – Sunday you can buy twilight tickets which are cheaper than the regular daytime tickets. Adults: £7.49, kids: £4.95. Thur – Sun open until 9pm, Mon – Wed open until 6pm.

Dreamland is a historic amusement park from the 1920s, which has undergone a hipster facelift thanks to a £30 million regeneration trust and a clever branding agency. As a result, it has all the hip mama bloggers peeing their dungerees to Instagram its giant deck chairs and kitsch signage (I include myself in this category)… 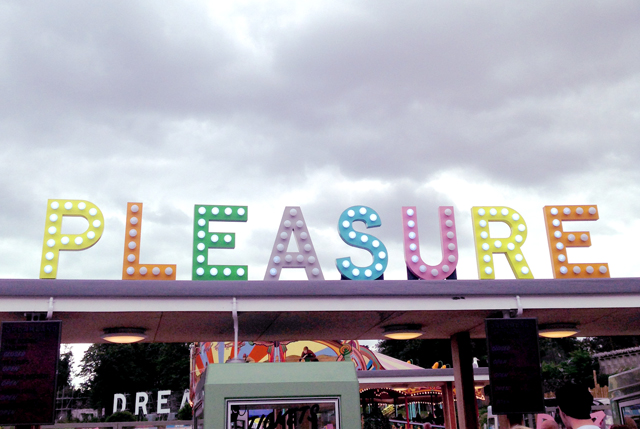 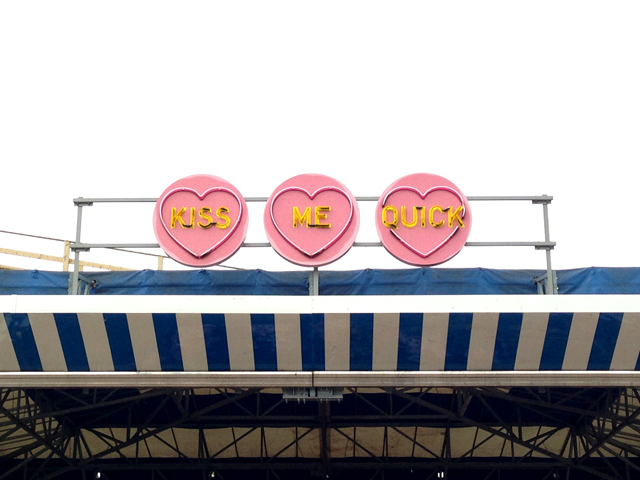 It’s basically just a good old amusement park with all the regular rides and bucket loads of fun. There are lots of things to do for small kids – mine, aged two and five, loved it. But to get the most out of the rides they really need to be over the age of seven.

You can stuff your face with high quality junk food at a number of different places inside Dreamland. You can get your traditional fish ‘n’ chips here or have a pizza in a ’50s themed  roller disco diner. This is retro done really well.

After a few rounds on the dodgems and a belly full of junk food, you’ll probably be spent, but look on Dreamland’s events page to see what’s on. There are gigs and cheesy discos on every weekend evening. 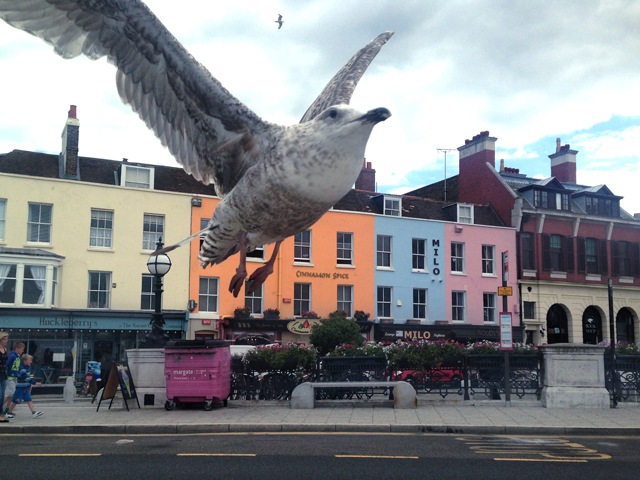 HOW TO GET THERE: Margate is an hour and a half on the train from London from St Pancras or Victoria National Rail stations. Check The Train Line for details. Or approximately a two hour drive from central London.

THE BEST DAYS OF THE WEEK: Thursday – Sunday (these are the days that Dreamland is open late). Check Dreamland for more detailed opening times.

GO WITH: Kids and anyone who loves a bit of seaside kitsch.

0
WHAT’S HAPPENING ON THE WEB: IN THE LADYLOOP 19-08-15
HACKY MONDAYS – ALWAYS HAVE A SPARE LITTLE BUDDY