ART FOR THE SISTERHOOD 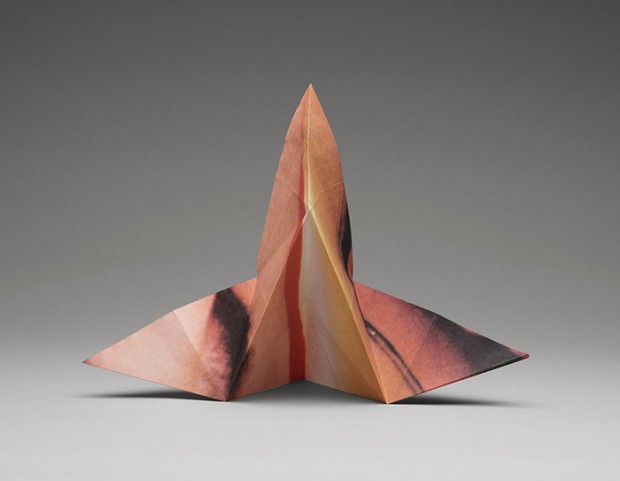 Feminism: it’s fun! And hilarious. You know how I know that? Feminist art.

Discovering art made by/for/about women showed me just how powerful, witty, visceral and provocative both art and feminism can be. The best part is, I never stop discovering it: I encounter legends from the past and intriguing new voices from all over the world, all the time. These artists offer a smart way of articulating the rage, pointing out things that are just not good enough (it’s 20-bloody-15) and suggesting the way things could be.

In celebration of IWD and the sinister sassy silly supremely inspired sisterhood everywhere, here are five of my favourite artists with a feminist heart. 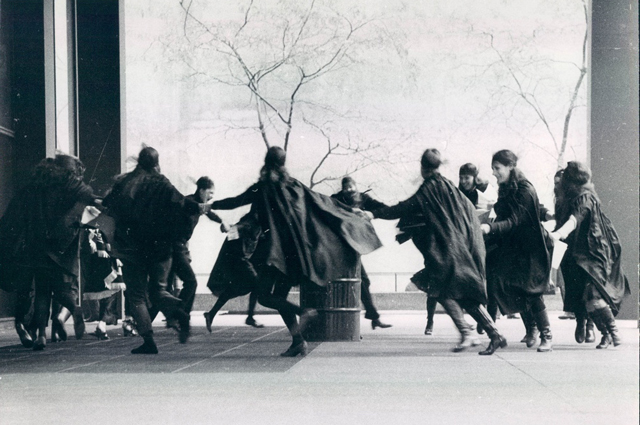 Dance of the Witches in Front of Chicago Federal Building, Oct. 31 1969.

That’s one hell of an acronym: it stands for ‘Women’s International Terrorist Conspiracy from Hell’, or otherwise, ‘Women Inspired to Tell their Collective History,’ the prescient anti-call-centre-flavoured ‘Women Incensed at Telephone Company Harrassment’, or else the Christmassy-themed ‘Women Interested in Toppling Consumer Holidays’, which all work, really.

W.I.T.C.H. were a network of radical activists, spread across the USA in the late 1960s, who used the tools of theatre and performance art to make strident political points. Like the Guerilla Girls or Pussy Riot, who could be considered their natural heirs, they were bold and funny and knew how to get attention: and they were never afraid of going after the really, really big targets. They took on Wall Street in their first major action (they called them “zaps”, in which they placed hexes on their targets) as well as senate hearings on birth control, and the notorious anti-commie House Un-American Activities Committee.

One of the lessons from W.I.T.C.H. is how women use the insults hurled at them – in this case, adopting the look of the archetypal crone – and turn them into tools to claim power and command attention. And is this not the best manifesto ever?

WITCH is an all-women Everything.  It’s theatre, revolution, magic, terror, joy, garlic flowers, spells.  It’s an awareness that witches and gypsies were the original guerrillas and resistance fighters against oppression – particularly the oppression of women – down through the ages. Witches have always been women who dared to be: groovy, courageous, aggressive, intelligent, nonconformist, explorative, curious, independent, sexually liberated, revolutionary.  Witches were the first Friendly Heads and Dealers, the first birth control practitioners and abortionists, the first alchemists (turn dross into gold and you devalue the whole idea of money!)  They bowed to no man, being the living remnants of the oldest culture of all –one in which men and women were equal sharers in a truly cooperative society, before the death-dealing sexual, economic, and spiritual repression of the Imperialist Phallic Society took over and began to destroy nature and human society. 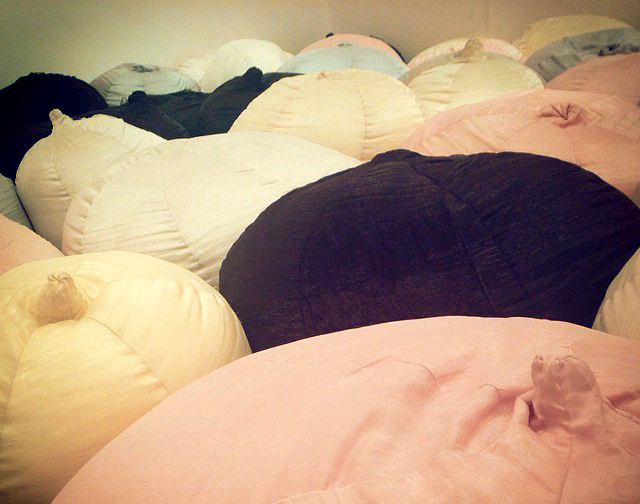 I remember the first time I saw a work by Georgia O’Keefe: I would have been 12 or 13, and it was a defining moment. I was mesmerised by the gradations of vibrant colour, by the hypnotic sinuousness and sensuousness of the undulating lines. I loved the endless variation: it was like flicking through a book of galaxies. I wasn’t the most worldly kid in the world, but somehow I figured out it wasn’t just a bunch of pictures of orchids.

Likewise, the first time I felt a work by Thai artist Pinaree Sinpitak (it was only last year), it had a similar effect on me. I walked into a room full of boobs, took off my shoes and threw myself onto them. They were soft but supportive, their organza skins shimmering in pink and black and cream and yellow, and they were all a little different: big and small with nipples nudging in every direction.

I don’t know if you’ve noticed, but there are a lot of massive erections out there: the primacy of the phallic thrust has defined the cityscape from the first obelisk to Norman Foster’s pickle, and in art, it’s no different. The curves and fluidity associated with the female form are typically the passive counterpoint to the forceful forward motion of the muscled male. Softness is construed as weakness: an object to gaze upon, not the subject taking action. Experiencing Sinpitak’s work is a celebration of the strength in the female form: in a tactile and playful way.

As a sidenote, I experienced Sinpitak’s work at Singapore Art Museum, the same place I experienced Nguyen Thi Hoai To’s equally booby, funny and excellent The Loofah Trellis as part of the Singapore Biennale. It’s exciting to find that women and artists everywhere are singing the same song. 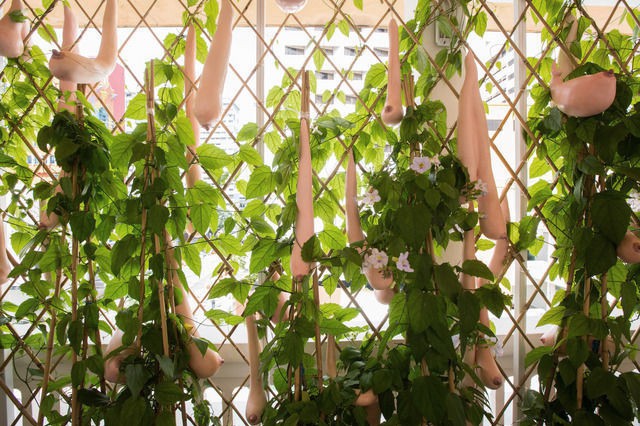 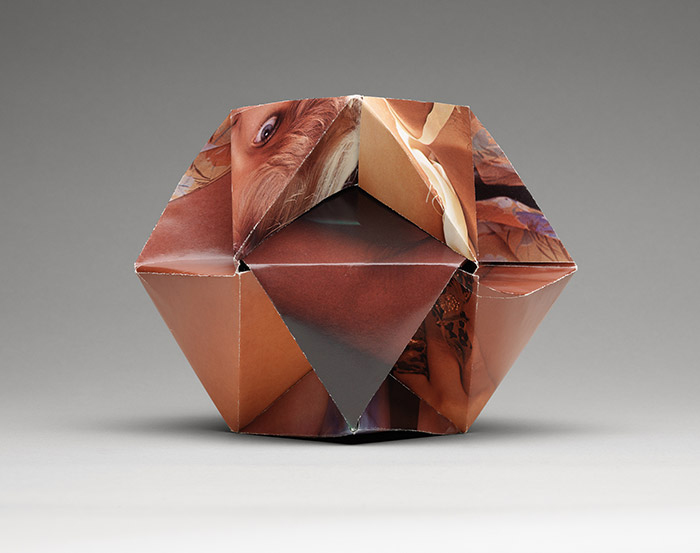 Kim Gordon, the unstoppably-awesome co-founder of Sonic Youth, recently reflected on 30+ years of being in the music biz: “Women aren’t allowed to be kick-ass. I refused to play the game.”

Canadian artist Myfanwy Macleod is highly, unapologetically, loudly, kick-ass. I had never heard of her when I walked into a retrospective of her work at the Vancouver Art Gallery, but within ten minutes she had scissor-kicked her way into my art-world top ten. Her work tackles that holy trinity of fun – sex, drugs and rock’n’roll – which somehow, blokes have managed to monopolise till now. Moving seamlessly between the domestic and mechanical, the ethereal and the violent, Macleod’s work references music, fantasy and stoner culture as only a real fan can do, while at the same time giving room to the way women’s lives and identity can contorted and abused by the same cultures. There’s the Camaro in graceful mid-flip, the flick-haired mannequin in the Led Zeppelin T-shirt, the room stacked with replica Marshall amps: right next to a room in which soft-porn centrefolds are folded into delicate origami shapes. 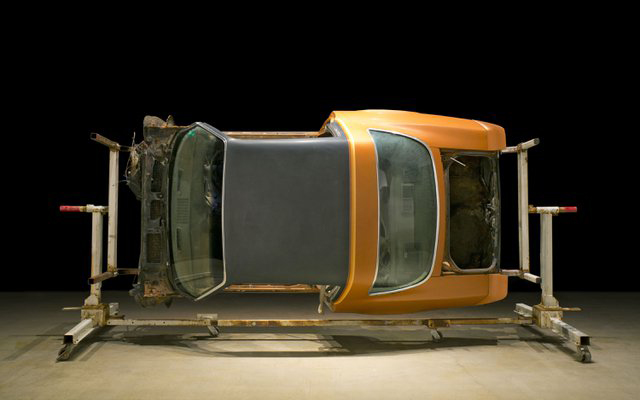 That combination of competing, conflicting loves or concerns really speaks to me: it’s like balancing being a hardcore feminist with loving hardcore hip-hop. It feels like a more nuanced way of dealing with the complicated realities of living as a woman right now.

Macleod deals with space and the sculptural with a confidence that reminds me of Louise Bourgeois, (who, for my lady-biased money, was the greatest sculptor of the 20th century). Both Bourgeois and Macleod manage to achieve a sense of both intimacy and grandeur with their work, balancing out the binaries of strength and vulnerability, the personal and the societal, violence and humour. 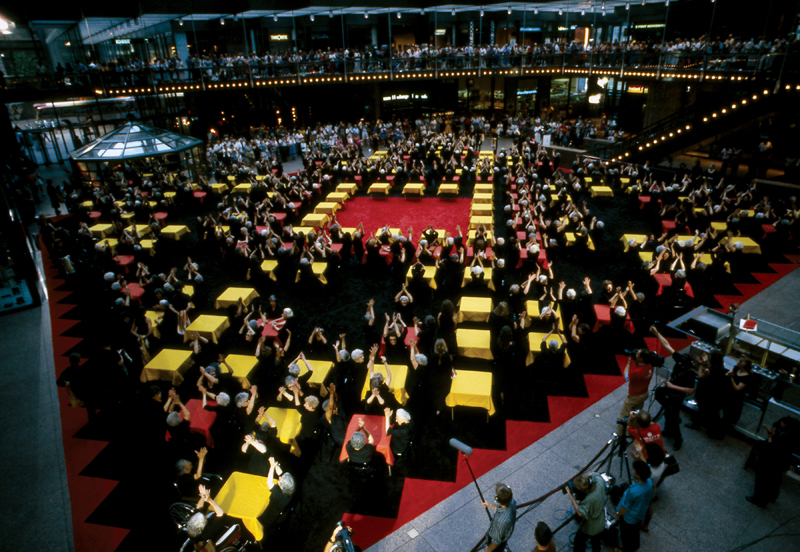 In breaking news, society isn’t that crazy about older ladies: unless we’re talking about the Dowager Countess and/or Helen-Mirren-in-a-bikini. Many women write about feeling invisible to our culture once they stop being in the white-hot glare of the male gaze, basically tumbling from handmaiden to whore to chrone without stopping at madonna, passing go or collecting $200.

Which is why I love The Crystal Quilt, a performance in a Minnesota mall, that was the culmination of a project documenting the stories, skills, experience and perspectives of older women. Aesthetically, it’s beautiful to watch unfold: tables laid out in the centre of a mall, forming a quilted pattern, the women moving in synchronised, loving and fluid motions, while the sounds of their stories wash over them and through the mall, that temple of feminine preoccupation.

This reminds me of Judy Chicago’s iconic work, The Dinner Party, which I also remember rocking my world when I first learned of it in a high school art textbook. It was one of the first times I can recall seeing a ‘her-story’ view of art history, a place lovingly set for each of the female artists who had been sidelined by the dominant narrative. The connection to Lacy’s project comes in the epic scale of the task, and Chicago’s collaborative approach to making the work, celebrating “women’s skills” like ceramics, embroidery and weaving: which have also been cut out of the world of fine art for a long time. 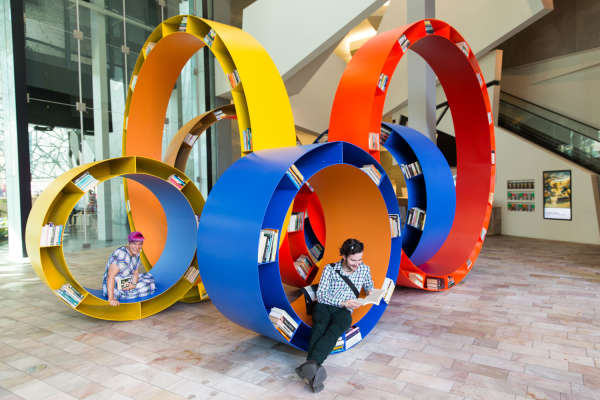 As the stereotype goes: the stoic, silent man takes action, while the emotional, erratic woman needs to discuss her feeeeeeelings with all her girlfriends.

We’re derided for this, and yet I think it’s incredibly constructive: changing the world should start with starting a conversation. Australian artist Emily Floyd creates works that stimulate thought and participation, empowering audiences with the tools to make their own voices heard, and listen to the perspectives of others. Her stunning work The Dawn is a library unlike any other I’ve experienced: drawn from the Trades Hall union bookshop, this collection positions feminism within the context of other social movements, arranged in an extraordinary structure. Small Press is a room equipped with typewriters, stamps and a blank booklet, in which we’re encouraged to write our own manifestos, while Word Farm, created with designer Mary Featherston, turns language into a playground for kids, inspiring expression. 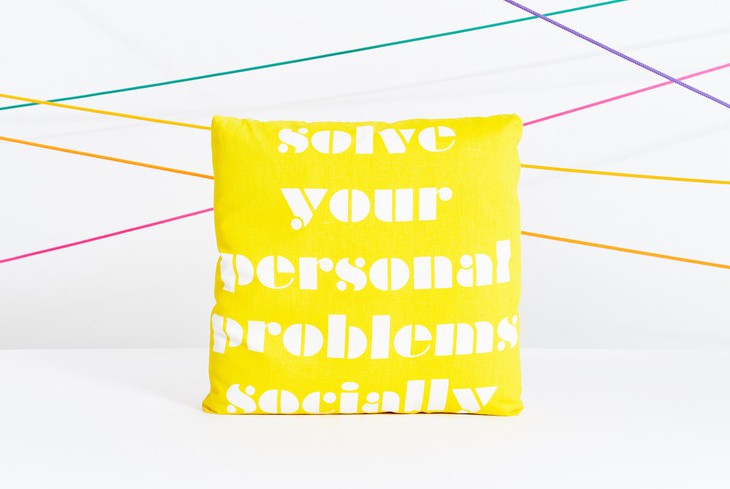 For me, a work with the title Solve Your Personal Problems Socially sums up the philosophy behind Floyd’s work up beautifully. I see a similarity with American artist Candy Chang, who also uses her work to give the audience a platform for expressing their individual concerns and desires in a social context. It’s a reminder that we’re not alone, and we’re stronger together.

Jess Scully AKA @jessaroo is a festival director, media producer and curator who uses creativity and the arts to engage communities with each other, and with the public realm. She is the festival director of Vivid Ideas, curator of TEDxSydney, public art curator for Green Square Library and Plaza and instigator of Kids Hack Day Sydney. In the past, Jess served as policy advisor to the NSW Minister of the Arts, directed the Qantas Spirit of Youth Awards (SOYA), and edited magazines including Empty, Yen and SummerWinter.
LADYLAND LOVES
Tweet