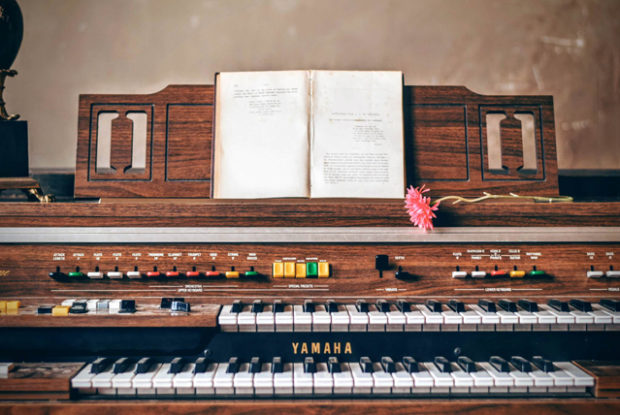 When it was first published in Italy, Novecento produced critical controversy. Some people declared it epic, a masterpiece, the best book they had ever read; others instead were very critical, denouncing it as a meagre, hasty little story.

I only read it recently, but I found that amidst the discussions, everyone seems to loose sight of the fact that this is not a book, a novel, a story or a poem. This is a theatre monologue, and a really good one at that.

It’s an image, the fraction of a physical moment. As you read it, you can really see an actor on stage, dancing, gesticulating against the dark backdrop of an empty stage. You can hear his voice resonate in the theatre hall. And you can feel Novecento’s Jazz vibrate in the air. And you can even ignore the prescriptive stage directions that punctuate the text and imagine the scene exactly as you like it.

Baricco’s prose will still rock you the same way Novecento rocks the piano and the Ocean rocks the ship.

“He was twenty-seven, but seemed older. I barely knew him: I had played with him those four days, with the band, but that was all. I didn’t even know where he bunked. Of course the others had told me something about him. They said a peculiar thing: they said, Novecento’s never been off the ship. He was born on this ship, and has been here all his life. Always. Twenty-seven years without setting foot on terra ferma. Put like that, it sounded like a colossal bunch of bull… They also said that he played music that didn’t exist. What I knew was that every time, before we started playing, there in the ballroom, Fritz Hermann, a white guy who didn’t know anything about music but had a great face for a bandleader, went over to him and said in an undertone:

Novecento nodded yes and then played the normal notes, staring straight ahead, never a glance at his hands; he seemed to be somewhere else. Now I know he really was somewhere else. But at the time I didn’t know: I just thought he was a bit odd, that’s all.

That night, right smack in the middle of the storm, with that air of a fellow on vacation, he found me, lost in some corridor looking like a dead man. He glanced at me, smiled, and said, ‘Come on.’

Now, if a guy who plays the trumpet on a ship meets someone, smack in the middle of a storm, who says to him ‘Come on,’ there is just one thing that guys who plays the trumpet can do: go. I followed him. He walked. I… it was a little different, I didn’t have that composure, but still… we reached the ballroom, and then, ricocheting this way and that–I mean me, obviously, because he seemed to have tracks under his feet–we arrived at the piano. There was no one around. It was almost dark, just a few small lamps here and there. Novecento pointed out to the feet of the piano.

‘Release the brakes,’ he said. The ship was dancing like there’s no tomorrow, you had a hard time standing on your feet–it made no sense to unlock the wheels.

‘If you trust me release them.’

This is madness, I thought. And released them.

‘And now come and sit here,’ Novecento said to me.

I couldn’t understand what he was getting at, I really couldn’t understand. I stood there, holding on to the piano, because it had begun to slide like an enormous black bar of soap… It was a shifty situation, I swear, up to your neck in the storm and then that lunatic sitting on his stool–another bar of soap–with his hands on the keyboard, steady.

And he began to play.

Now, you don’t have to believe this, and, to be honest, I wouldn’t believe it if somebody told me, but the truth of the matter is that that piano began to slide over the parquet of the ballroom, and took us with it, while Novecento played, never taking his eyes off the keys–he seemed to be somewhere else.

The piano followed the waves, back and forth, turned in a circle, headed straight toward the window, and when it got within a hair’s breadth stopped and slid gently back; the sea seemed to be rocking it and rocking us, and I couldn’t understand a damn thing, and Novecento was playing, he didn’t stop for a second, and it was clear he wasn’t simply playing, he was steering the piano, you see? with the keys, with notes, I don’t know, he was steering it where he wanted, it was absurd but that’s how it was. And as we spun amid the tables, grazing lamps and chairs, I realised that at that moment what we were doing, what we were really doing, was dancing with the Ocean, us and him, mad, perfect dancers, embracing in a slow waltz, on the gilded parquet of the night.
Oh yes.”