WHAT DO YOU CALL YOUR DAUGHTER’S VAGINA? 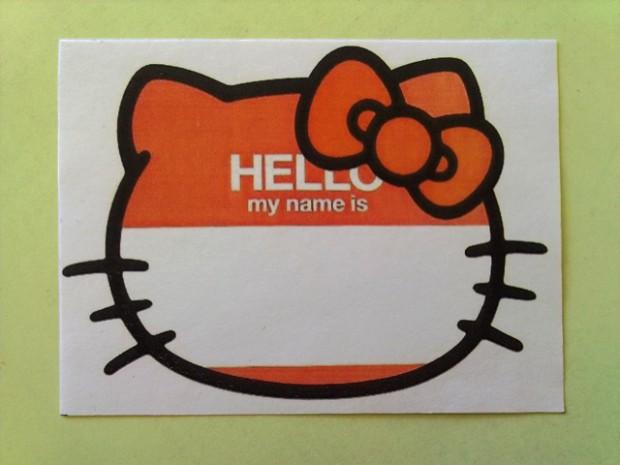 When you find out you have a daughter, there’s a thought that comes to you somewhere between ‘Cute shoes!’ and ‘She’s going to learn self-defence’ which is that this small person has two decades of minefields to cross to become the resilient, happy woman you want her to be.

The ‘Make Your Own Feminist’ checklist forms in your head: you’ll need to weather the storm of pink and the endless princess movies. Then you’ll need to nurture her love of science, Lego and football. Teach her to be brave, but balance that with compassion. Then there’s high school with its bitching, bras and bulimia. And then there’s boys. You want her to be strong, to stand her ground, to do what she wants to do in her own time. Above all you want her to be confident and make decisions she won’t regret.

And that sounds like a lot to take in when you’re staring at a tiny baby. It’s a huge undertaking of balance, choices and doing the ‘right’ thing and it all starts from day one. Caitlin Moran describes the moment perfectly in her book How To Be a Woman:

“My husband and I stared down at our beautiful little daughter. Blue-eyed, kissy-mouthed and soft as a velvet mouse, she had just done a dump so enormous, it had filled every crevice of her lower body. My husband approached her nethers, tentatively, with a wet- wipe, and then slumped back, looking defeated.”Not only have I got to clean all …this out,” he said, looking on the verge of mania, “but I don’t even know what I’m cleaning. What are we going to call it? We can’t call it ‘cunt’.” “Her NAME is Lizzie!” I said, shocked. “You know what I mean,” my husband sighed. “I’m not using that word. That’s what you’ve got. You’ve got a cunt. It’s not what she’s got. You’ve got … Scooby. She’s got Scrappy Doo. It’s totally different. Oh God – it’s all up her back as far as her hat. I’m wiping shit off a hat. I’m not sure I like parenthood. WHAT ARE WE GOING TO CALL HER VAGINA?”

I honestly can’t remember what I called mine as a kid. Front bottom, maybe? Definitely not vagina. I remember there was a girl in my class who called hers a pineapple, which mystifies me to this day. Only since I’ve had children, and all the fun medical examinations that that entails, have I been able to say it without feeling weird.

To start things off, I thought: ‘I’ll use the correct terms for all body parts – no silly names – I want her to be able to say ‘vagina’ with confidence, just in case she needs to.’ So I started out with good intentions but ended up saying ‘fanny’,  ‘front bum’,  ‘woo hoo’ (rhymes with Desmond Tutu), ‘fangina’ and sometimes ‘wee house’ ?!? Where did that come from? Then I realised my son, who is four, doesn’t have a clue what ‘penis’ means. From day one he has had a willy and I never thought anything of it. How’s that for a double standard? He told me his sister “Came out of a door in your fur, Mummy”!

So before sinking into middle-class-white-lady guilt about being a bad feminist role model, I did what any strong intelligent woman would do and posted the question on Facebook. One of my most popular statuses yet!

Behold, some answers to the question: What do you call your daughter’s vagina?

Front bum. Mostly because the girls don’t particularly distinguish it from their bum in general. Or, as Jessa has it, ‘bom bom’. Some of her nursery friends called it their ‘nu nu’… #minefield

I literally had this conversation with my husband yesterday! I asked him what he calls it in French to our daughter and he said he’s never thought about it because it’s never come up – I told him he’s gotta come up with something less formal than ‘vagin’ because it sounds awful and scary in French (plus it’s a ‘le’, go figure).

There were a few odd ones…

I once sat next to a woman at a wedding who told me she referred to her young daughter’s vagina as ‘the royal enclosure’ .

But most people said the same thing…

My aunt said, “Call it what it is: vagina. Call a penis a penis. No cutesy necessary.”

Vagina. That’s it. Demystify the body part. An elbow is an elbow, a foot is a foot, a vagina is a vagina etc. It’s just another part of your body.

We call all our bits their real, anatomical names. About 500 times a day and it’s still hilarious, apparently.

I’m not sure if Team Vagina is the larger team or just that they are more vocal, which sounds about right, but Team Woo Hoo was much smaller that I’d thought.

I asked my friend Jenny, a child psychologist, she said she hears all sorts of things and it doesn’t really matter before casually mentioning that a friend in forensic psych told her that children are taken more seriously in court cases involving abuse if they use the correct names.

Sheesh! I needed to try harder with the proper words.

I asked my friend Anna, a social worker with the NSPCC who leads on policy for child sexual exploitation and emerging forms of abuse, including female genital mutilation. She had some insightful advice and a nifty YouTube clip…

Children should be taken seriously inside or outside court whatever language they use. It’s their story to tell in the way that they feel most able. And when you are little that is going to look and sound very different to how you might tell the same story later in life. Demanding that a child explain what has happened in the ‘right’ language or in the ‘right’ way hurts them further and risks them internalising blame, shame and confusion in a way that is deeply difficult to unpick. Jenny is right, that it can happen. But responsibility for improving that needs to sit with police, lawyers and social workers; not parents.

It really (really) doesn’t matter what you call it: what does matter is that they know their Woo Hoo belongs to them. The hard part isn’t naming, just go with what feels natural to you, which will be different for everyone. It’s far more important that you feel able and confident to talk openly about all your bits, what they do and why we have them, than that you worry about calling them the ‘right’ thing. Worrying leads to getting flustered/stressed/avoiding naming them altogether, and then the message littlies pick up from that is that it is dirty, wrong or upsetting to talk about. So long as you are happy and confident talking about it and asking/ honestly answering questions as they come up, it’s all good.

So I’ve come full circle and decided on Woo Hoo. Aside from the times we say, Gina (rhymes with China), Nu Nu and Bot Bot without a hint of feminist guilt.

Now I’ll get back to the rest of that checklist… Aaaargh!