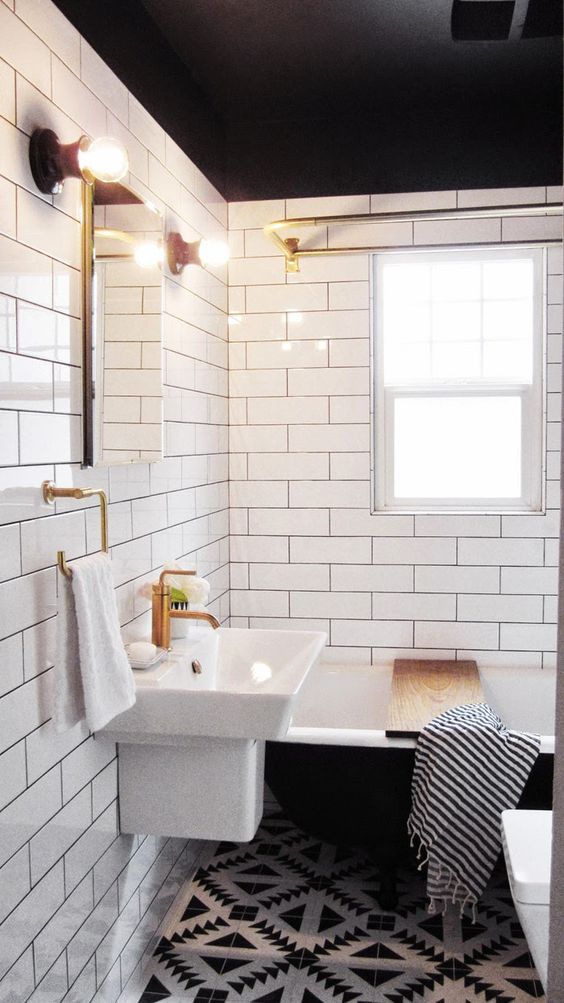 10 May ADVENTURES IN BATHROOM TILING

Posted at 14:58h in ARCHIVE by Celia Richardson
Share

I’ve just landed the worst clients ever and I’m doing their bathroom. They are fussy, can’t agree and want all the nicest bathroom fittings but can’t afford them.

Yes, me and my husband are renovating the bathroom and shower room of our new house.

I’ve seriously had to reign myself in from getting carried away with the design elements and not asking my husband’s opinion AT ALL, so have decided to approach the project as if I’m presenting to a client instead, which has actually brought in some lovely and surprising ideas from my better half.

Here’s our starting point. We both wanted a feature floor with encaustic (or cement) tiles, we have them in our current bathroom and love them. They’re definitely not cheap but, increasingly, there are lots of places that sell them now, some of my favourites being Bert and May (reclaimed but also new), Lindsey Lang (contemporary British designer) and Mosaic Del Sur (traditional patterns and bespoke designs).

I have honed down my (many) images to show bathrooms which have a patterned floor but white wall tiles, as I knew I wanted to keep the wall finish white and simple to offset the floor. I also wanted to see other examples of a brick/metro tile against the patterned tile.

The top bathroom (main image) really ticked all the boxes, the dark grout in the wall tiles blends nicely with the floor and I really like the dark ceiling. We also both loved the gold taps. 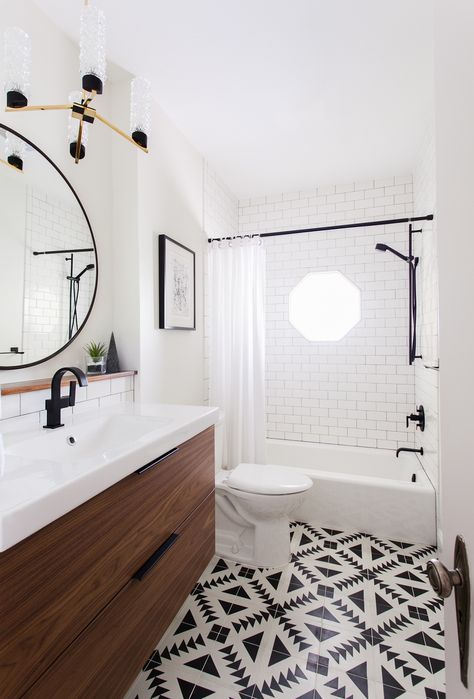 I really love the black taps in this bathroom and the geometric pattern, again the metro tiles looks great and showcase the dark grout I like. 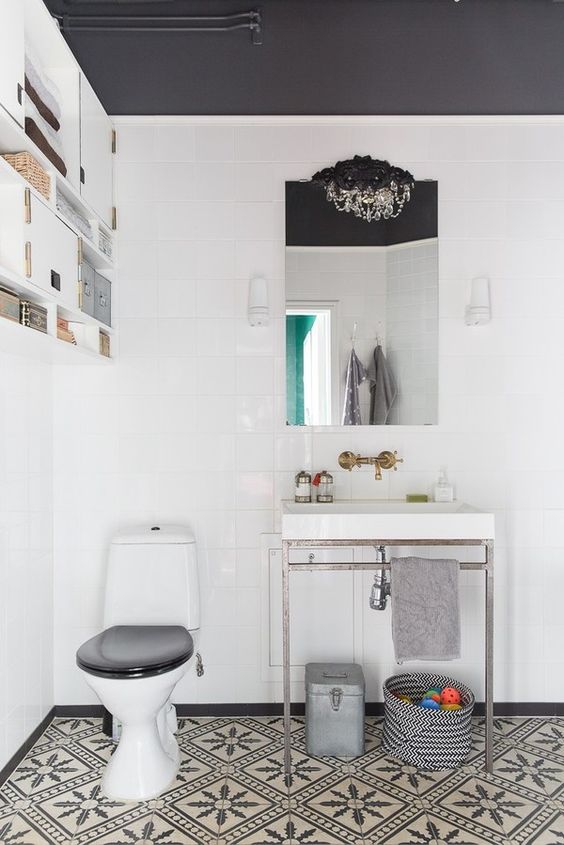 I think this space has great character, but this isn’t a slick bathroom so my husband wasn’t keen, however it’s still doing it for me with the dark ceiling again and the more intricate pattern of the tiles, gold taps and simple wall lights. 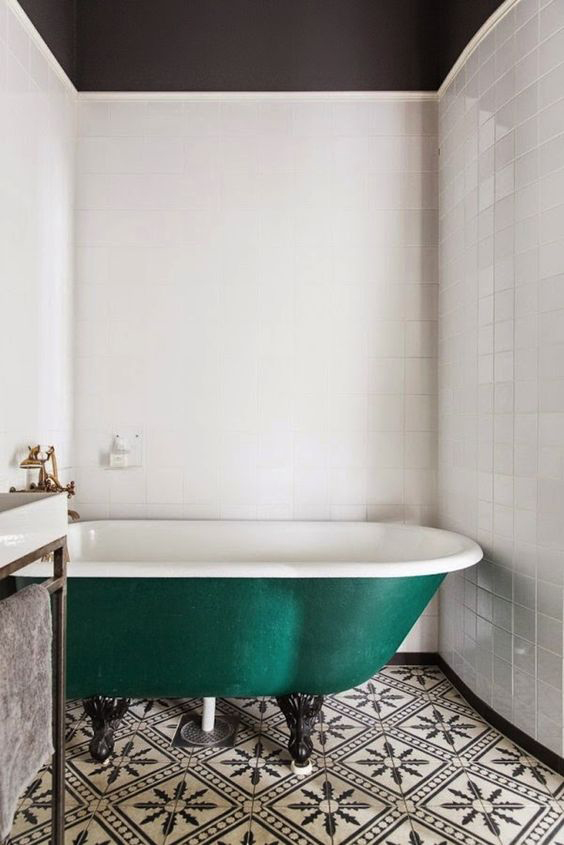 Oh look there’s the same tiles…this is the other side of the bathroom above and I adore the green bath, unfortunately we haven’t got space for a roll top bath but the colour did get me thinking! 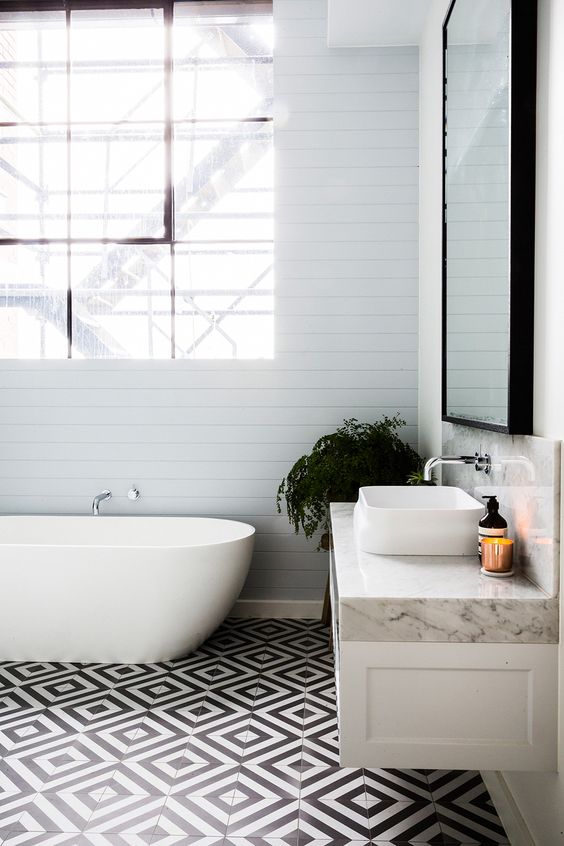 This image also has marble with wall mounted taps and a strong black mirror which I really like. Marble, if it’s your cup of tea, makes a great transition between wall surfaces. 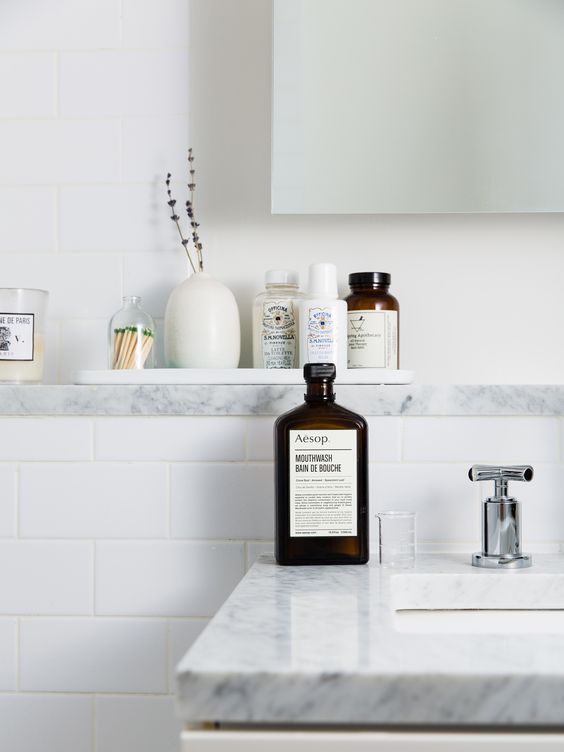 Applying a professional head to the process, I would advise that you give yourself one thing at a time to focus on with your space. Pinterest is a great resource, but its easy to get in a muddle. By purely looking at how other people had paired the patterned tile I knew I wanted to use either square or metro tiles in a ‘brick bond’ or ‘running bond’ pattern. Also when I look back over the images there is a clear theme with a strong ceiling colour and some very geometric shapes rather than intricate patterns.

Then came the surprising curve ball, just when I thought I had sold it in and knew where I was going, my husband announced he wanted a pink tiled bathroom! Strangely Clem and I had been discussing it as something we wondered if we were brave enough to do just the week before, so I wasn’t against the idea. 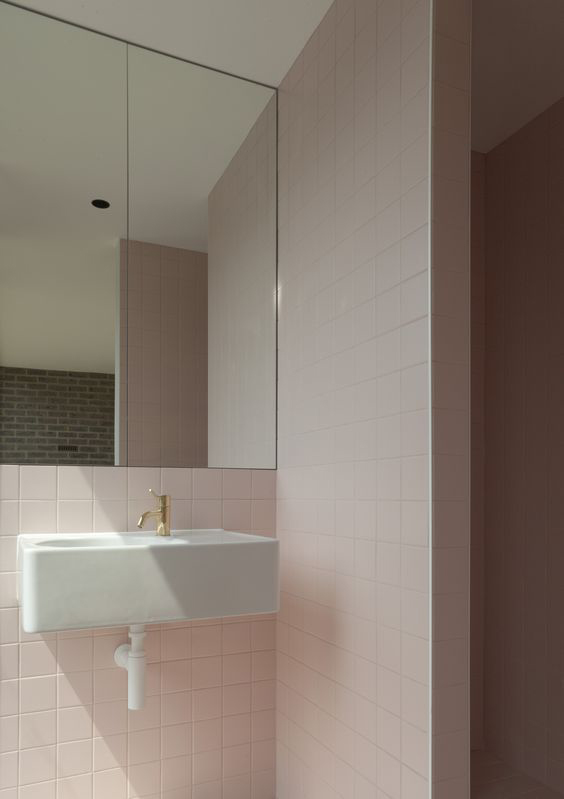 Then I saw this bathroom and instantly fell in love.

So we have now agreed that the shower room will have the pink tiles and the main bathroom will have the metro style tiles with a black ceiling. My mind was set when I stumbled upon one floor tile that could be used in both bathrooms to tie them together. 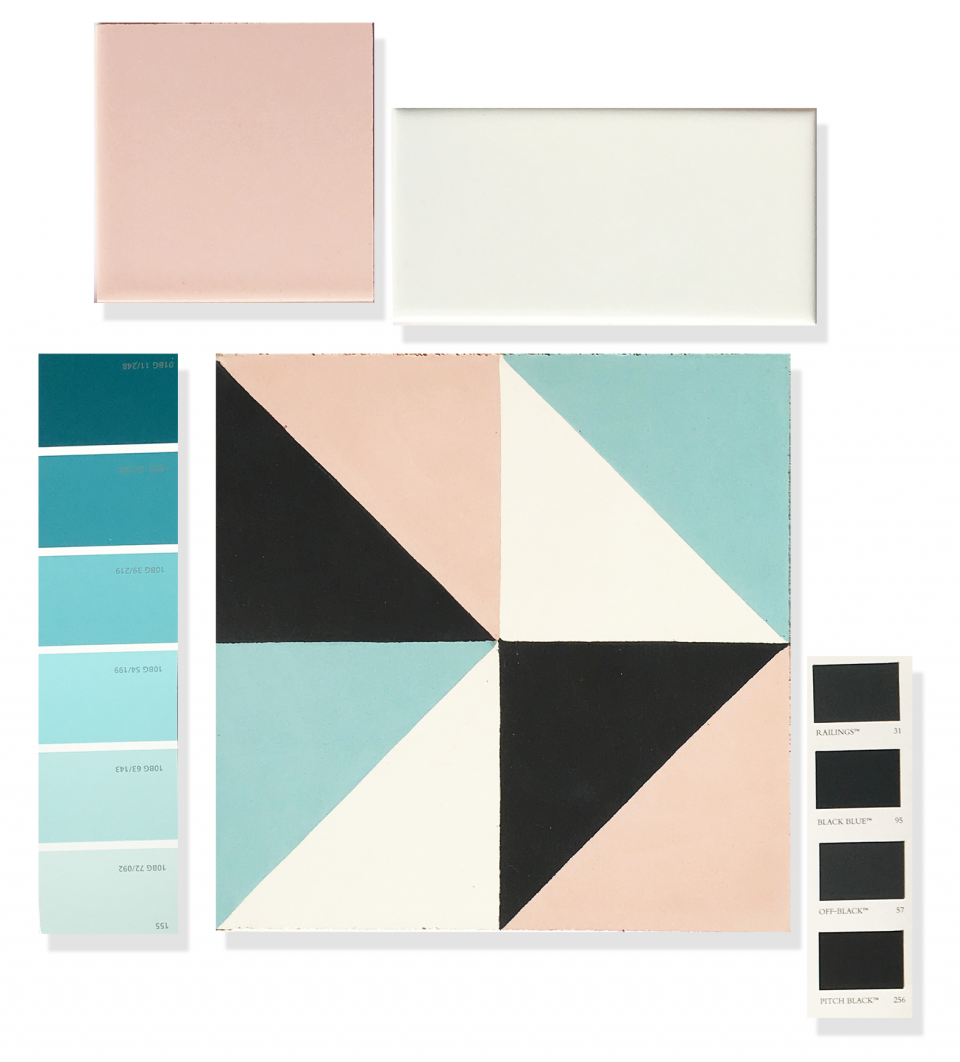 So, this is the final materials board with our chosen tile in the centre, a match of paint colours we can paint the ceiling in the bathroom (blue or black), the pink square tile for the shower room and the white metro tile for the bathroom.

I’m getting my pink tiles from my supplier, but Domus would probably be able to source them if I have convinced you?! For simple wall tiles I use Walls and Floors as they are reasonable and reliable.

Watch this space for more updates!