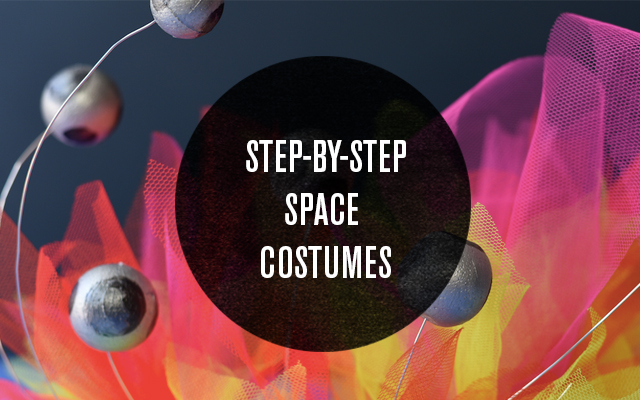 Posted at 23:22h in COSTUMES by Emma Scott-Child
Share

We’re getting ready for Camp Bestival. It’s time to sort out some costumes to go with this year’s theme, outer space. I’ve made bunch of outfits with varying levels of craftiness, from absolute beginner to craft ninja… I myself am not a sewing ninja… but I tried my best, just don’t look at the inside of the dress! Let me know how you get on with it, I’d love to see the results!

This one is super easy and you can buy all the bits from a craft shop. I actually found most of this stuff at Poundland. Great to make with kiddies. 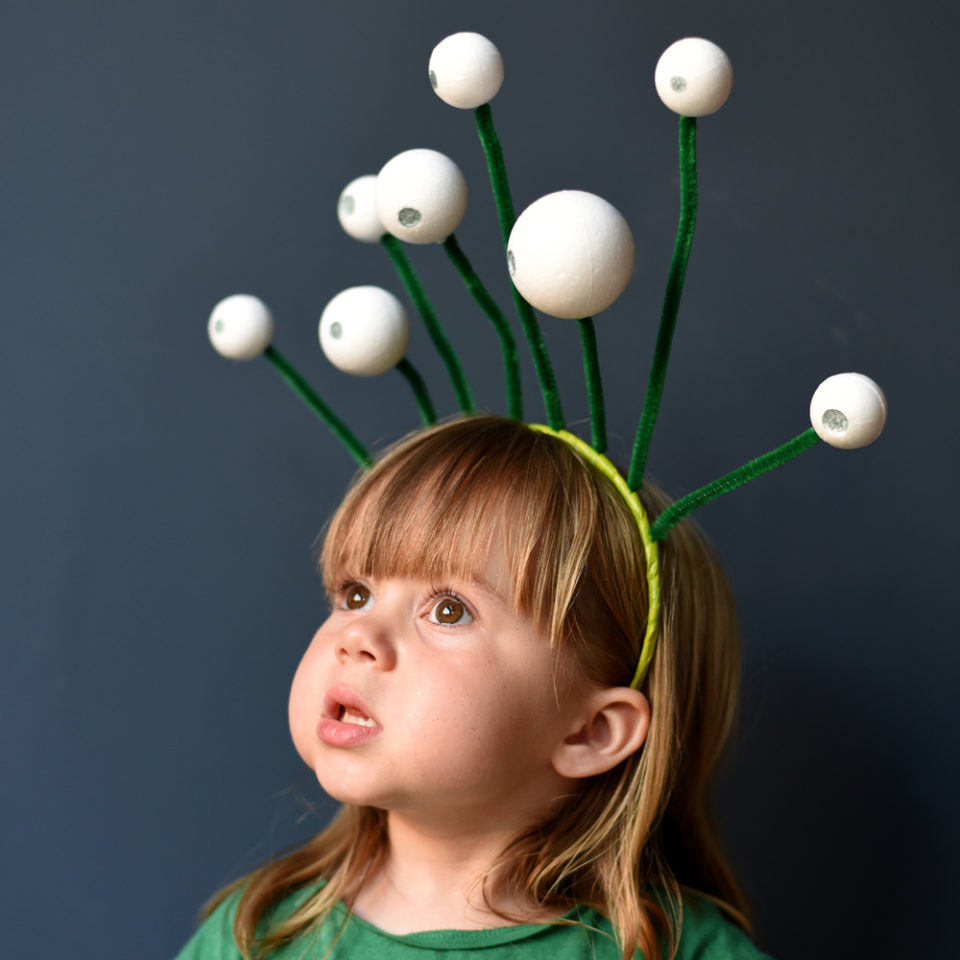 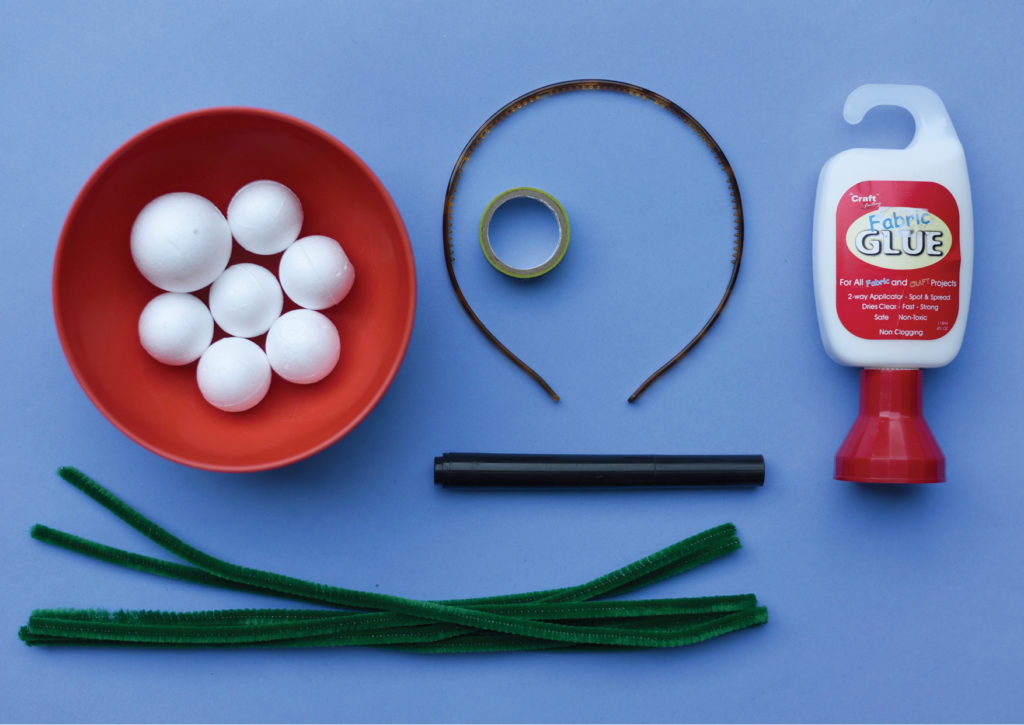 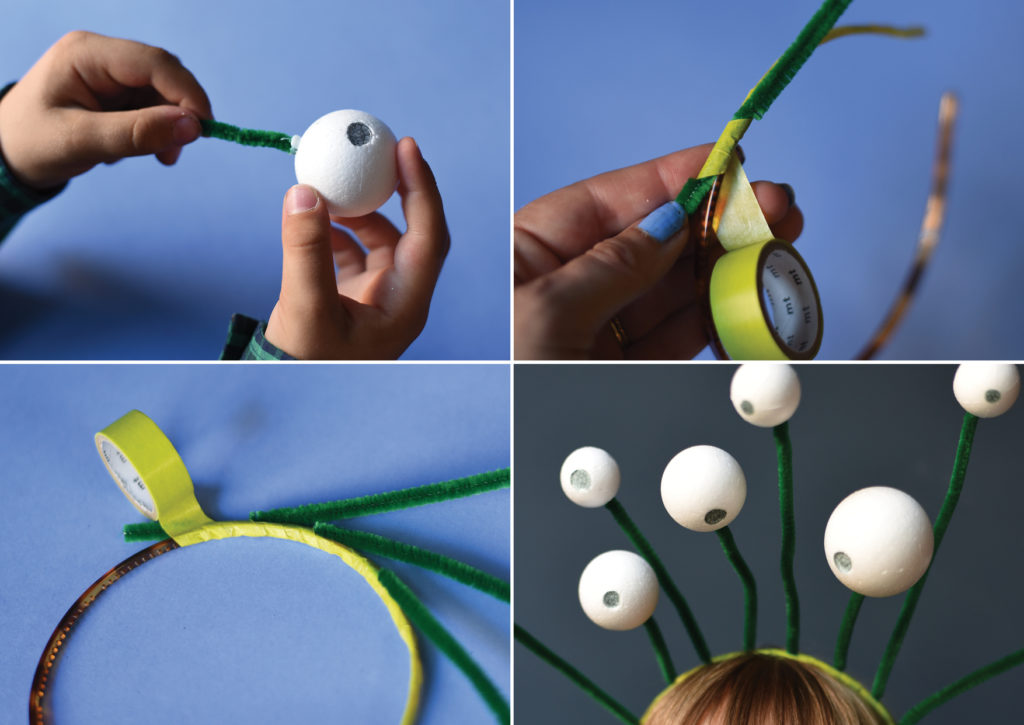 No need to learn calculus! Now all you need to be a rocket scientist is to drink a whole load of Pepsi Max and make a jetpack… 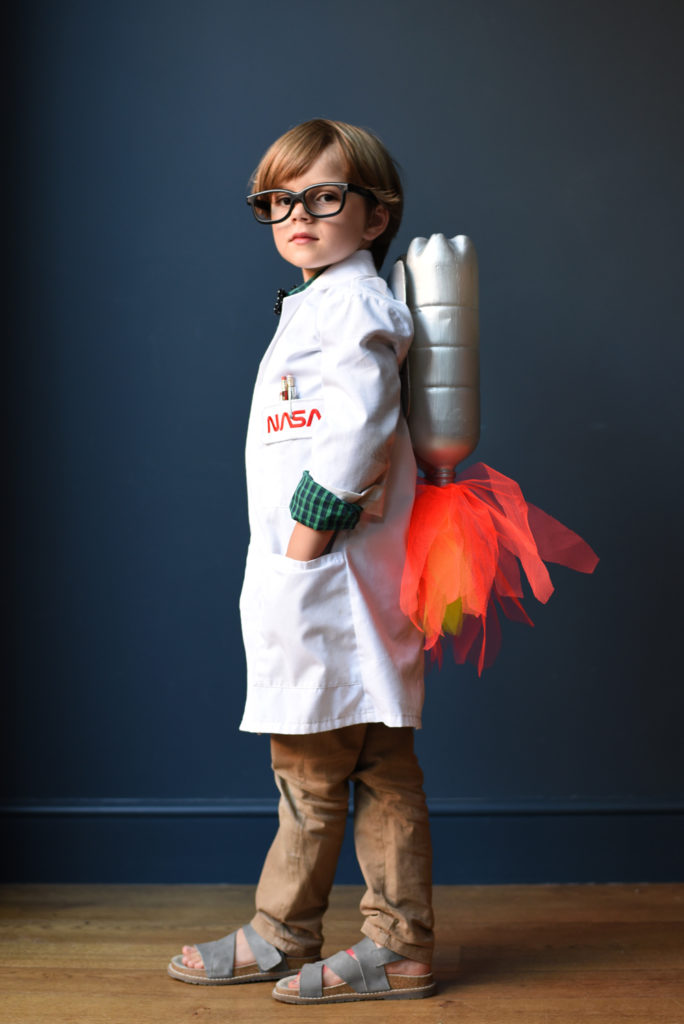 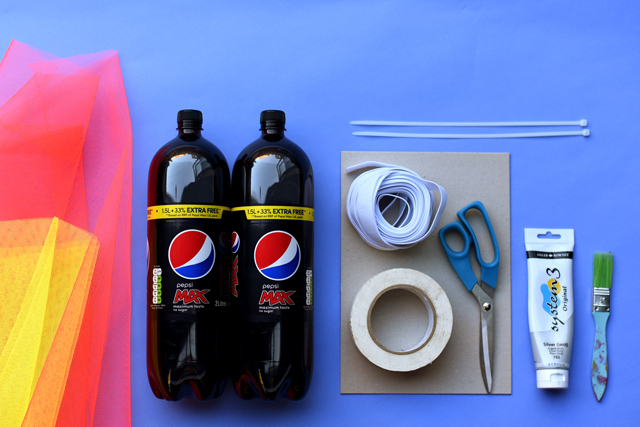 For the jetpack:
Two soft drink bottles
Some cardboard – the lid of a shoebox will do.
Tulle for the hot jets
Cable ties
Elastic for the straps
Silver paint & a paintbrush
Scissors
Some tape

For the scientist:
A lab coat. I ours mine on Ebay
A NASA patch – also available on Ebay
A button up shirt and bow tie
Some glasses – I took the lenses out of some 3D specs from the cinema. 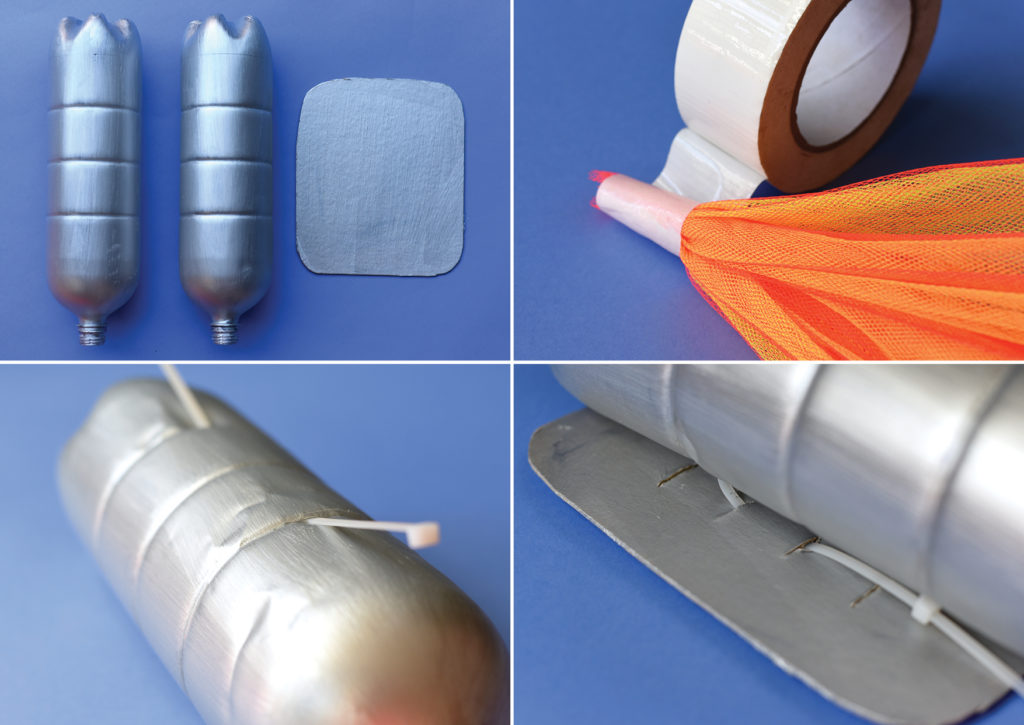 This is a great ‘no sew’ costume for little girls and Rae is the ultimate kickass role model for fierce little women!  BB8 is really fun, he might not last a long time, but he’s very cheap to make and fun to paint.  You could strengthen the body, or make his head out of papier maché, but I always feel like that’s a bit of a faff. this is a simple version that involves a lot less mess. 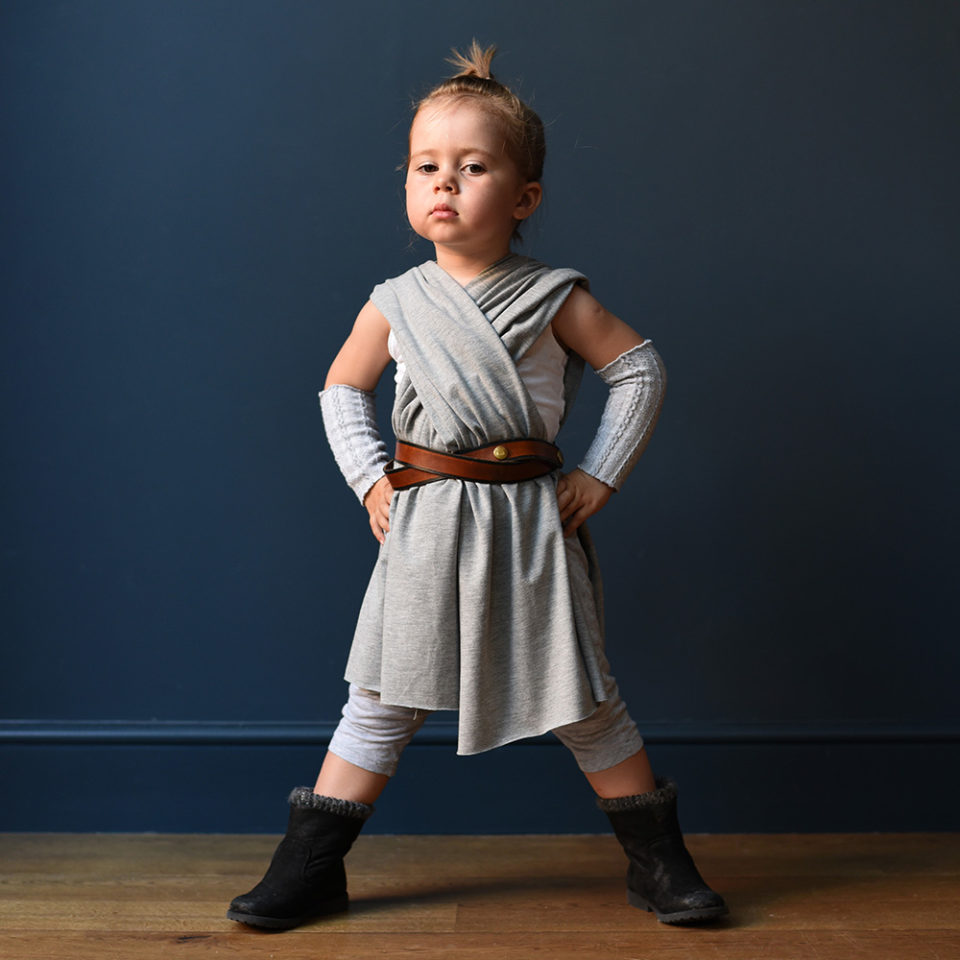 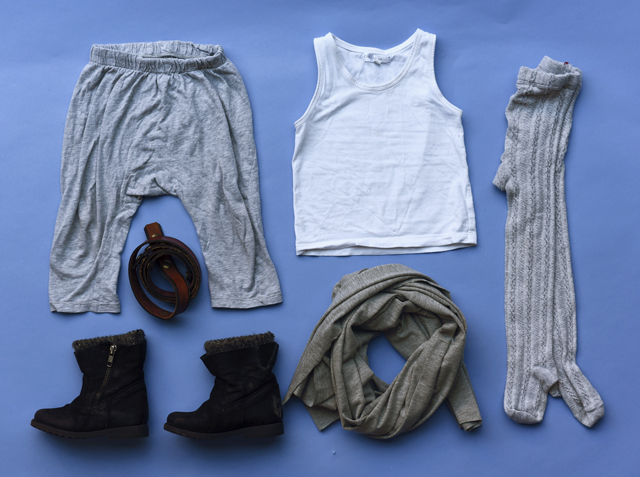 Some grey leggings or hareem pants
A white or grey vest top
Some old grey tights – cut to form arm bands
Black boots – or wellies would do.
A brown belt
Some grey fabric strips – I got some grey jersey from John Lewis.
Hair ties for her awesome badass hair style.

This is super easy, just cut the strips of fabric and cross them over at the front. Add the belt on top to hold the fabric strips in place. Cut the tights to form armbands, then go and kick some ass.

BB8 ON A STRING 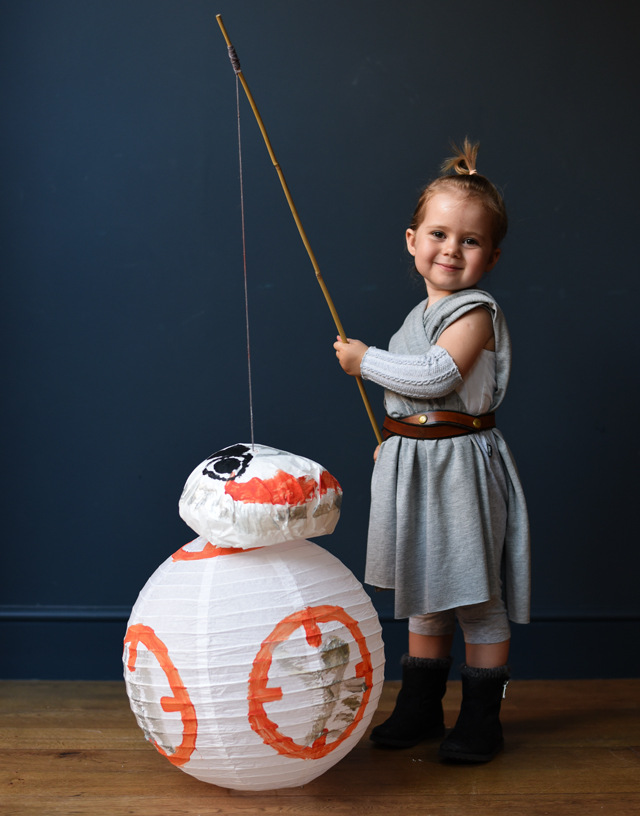 This guy is really fun, he might not last a long time, but he’s very cheap to make and fun to paint.  You could strengthen the body, or make his head out of papier maché, but I always feel like that’s a bit of a faff. I’ve done a simple version that involves a lot less mess. 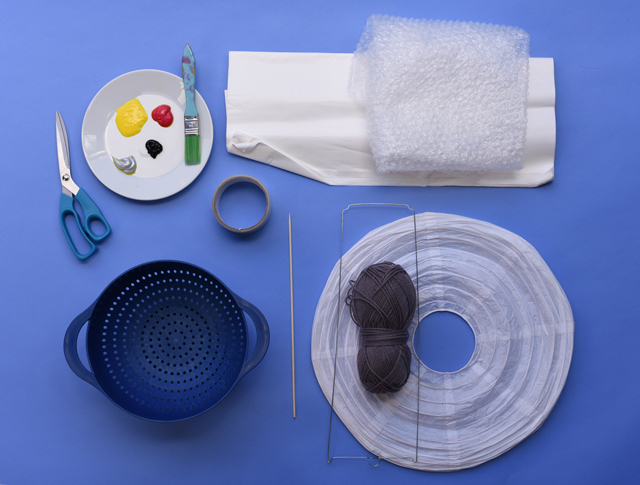 A white paper lampshade – I got mine from the local hardware store, they also have them at Ikea.
Some string or wool
A bamboo skewer
A colander or salad bowl
White tissue paper
Bubble wrap
Tape
Paint – silver, orange and black to be authentic
Some scissors 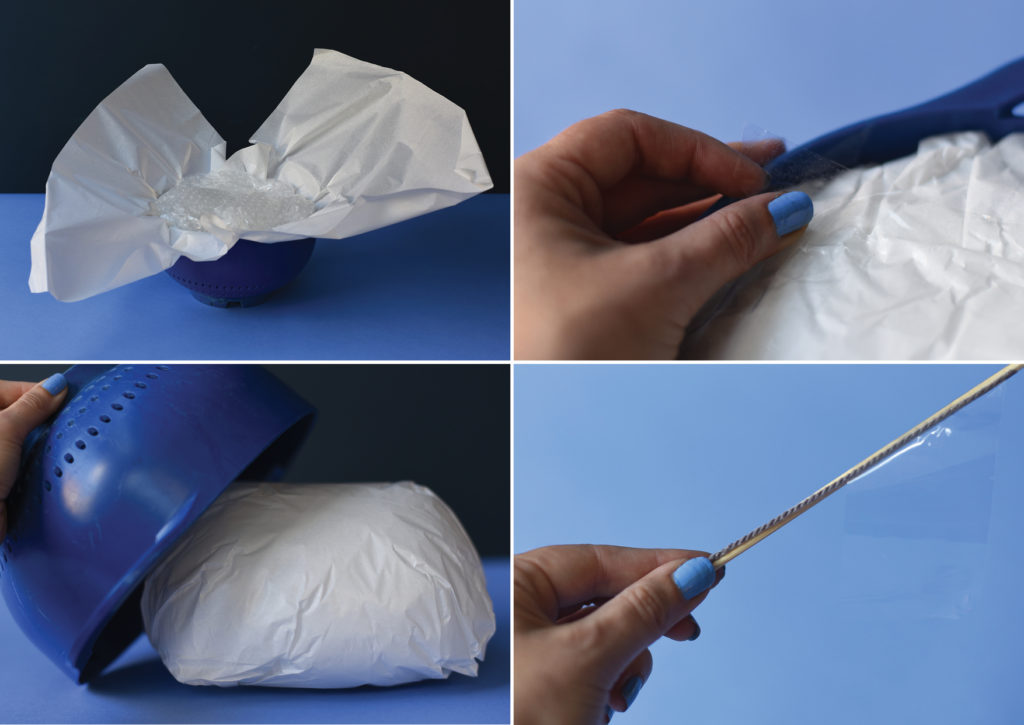 Not content with a regular old red festival wagon, Richard has added some serious power to launch himself into space. If you start saving now, you might be able to join him on his maiden voyage, mud permitting. 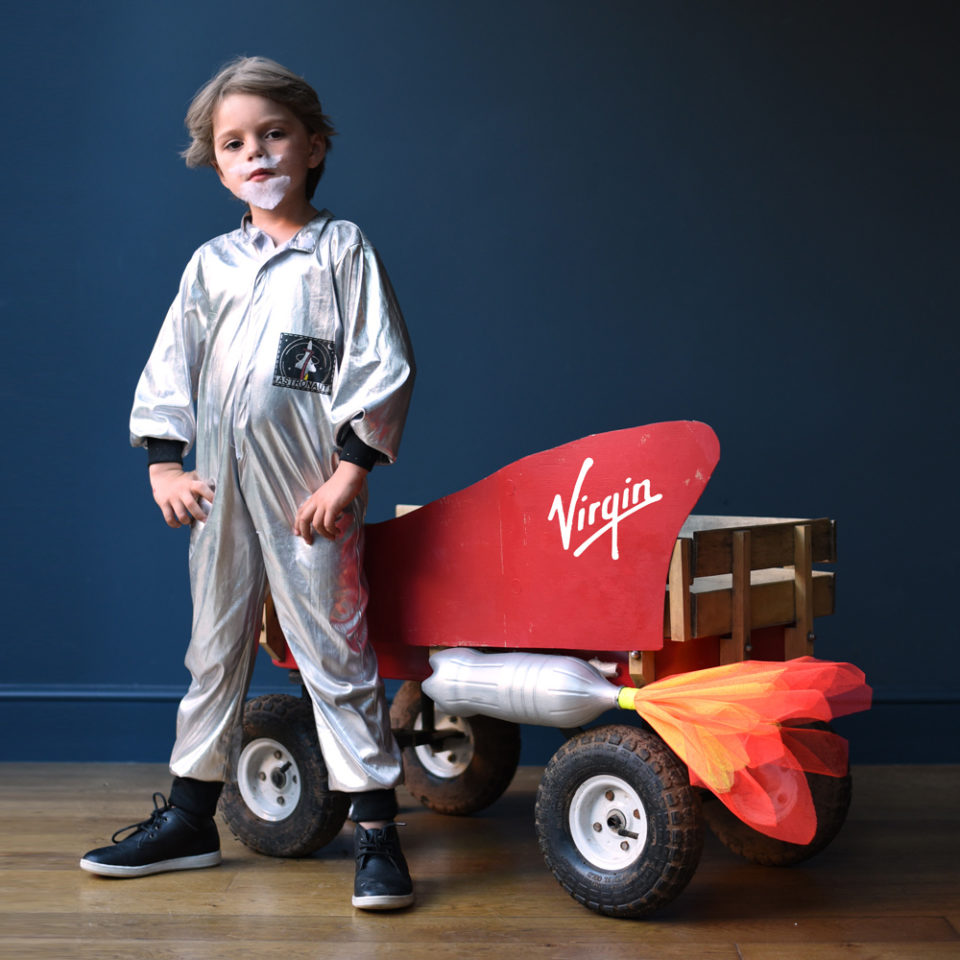 A space suit – we got ours online here, only £9.99. Richard loves a bargain.
A wagon, or you could use a bike or a scooter.
Two soft drink bottles
Some tulle
Tape
Cardboard – we used a pizza box
Red paint
White paint or tippex
Some fluff for a beard and talcum powder for lightening his hair. 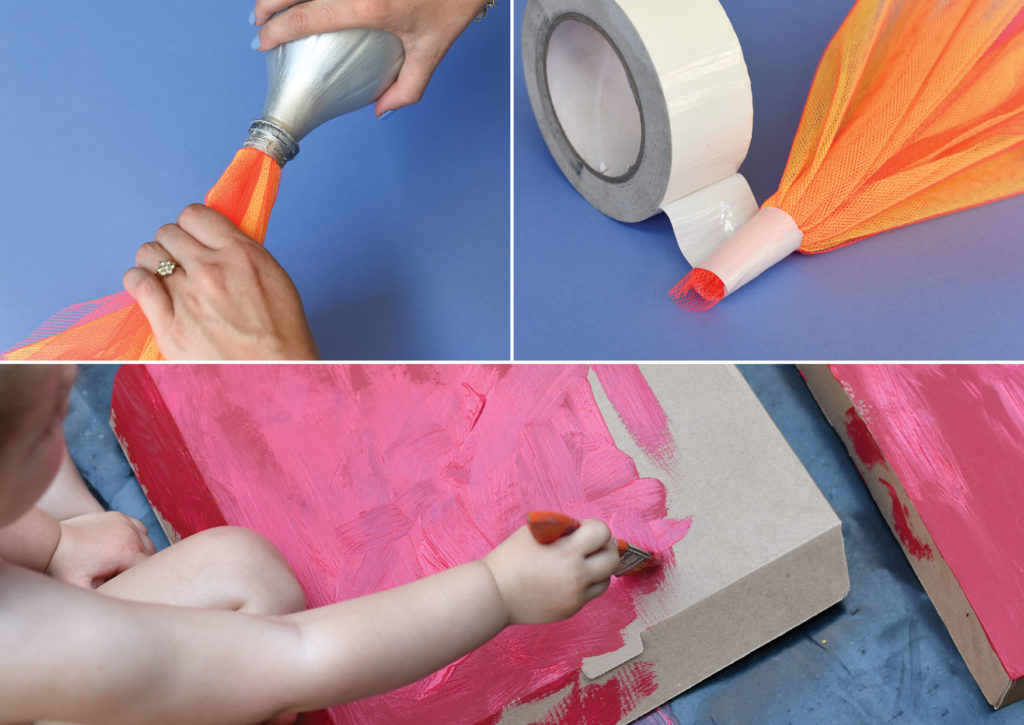 *This part may take a while. 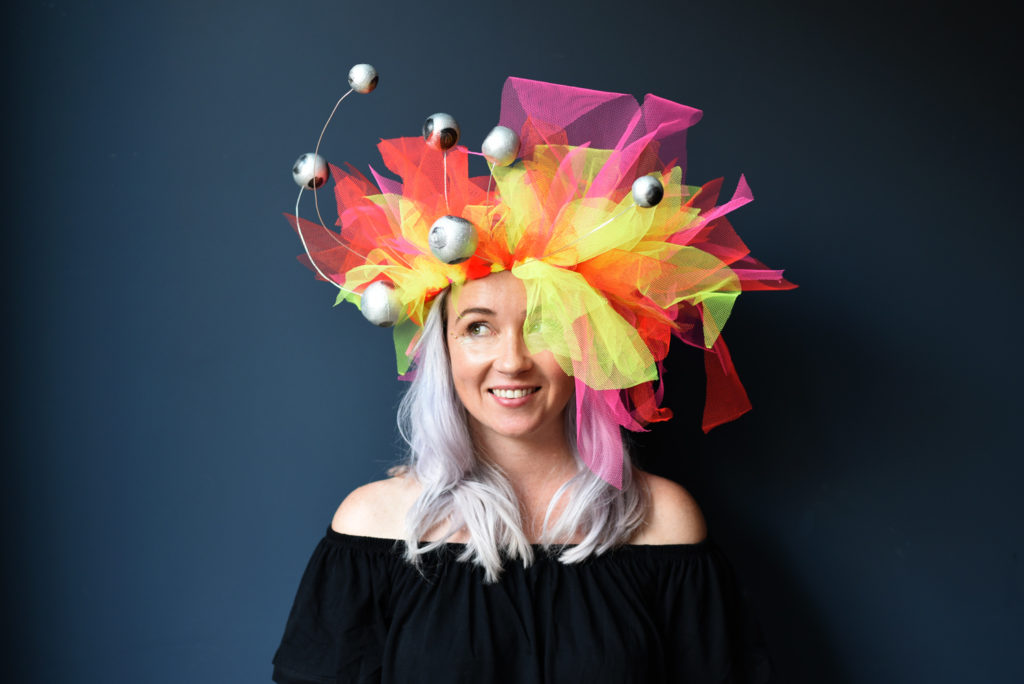 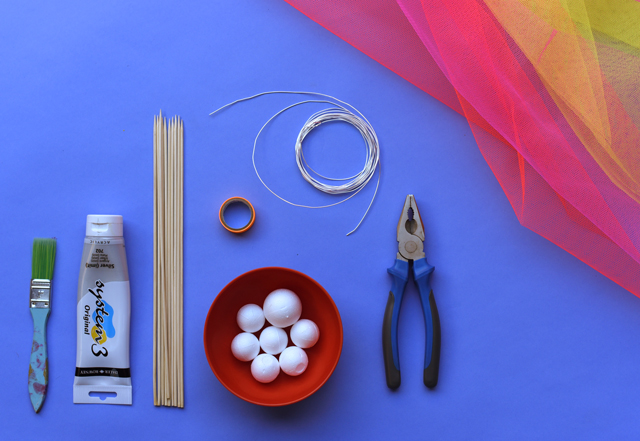 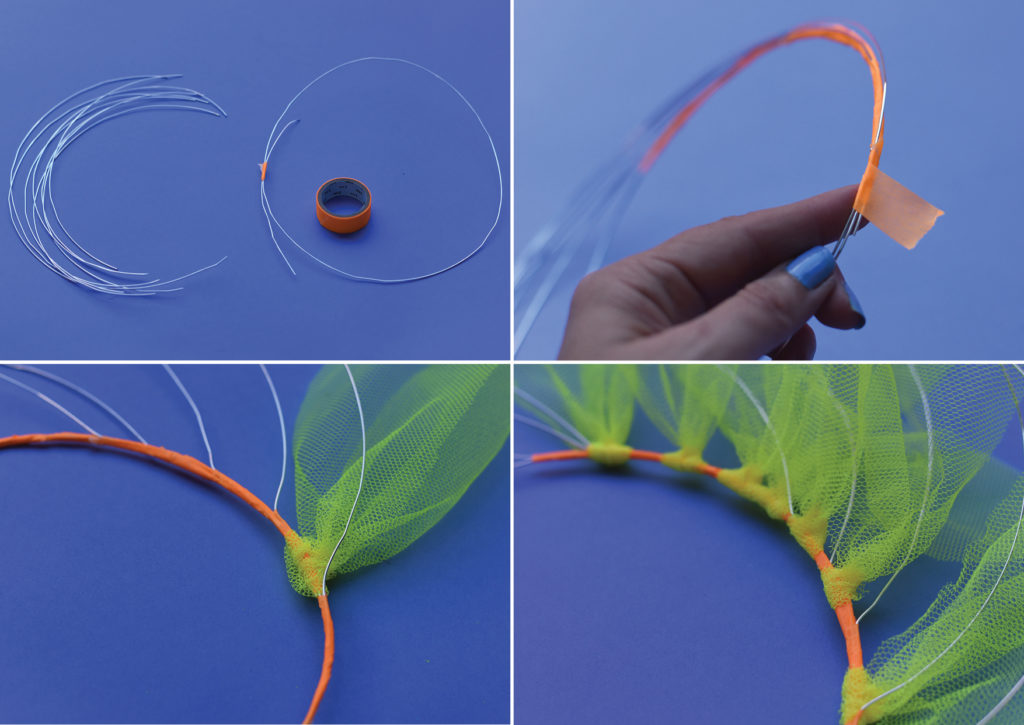 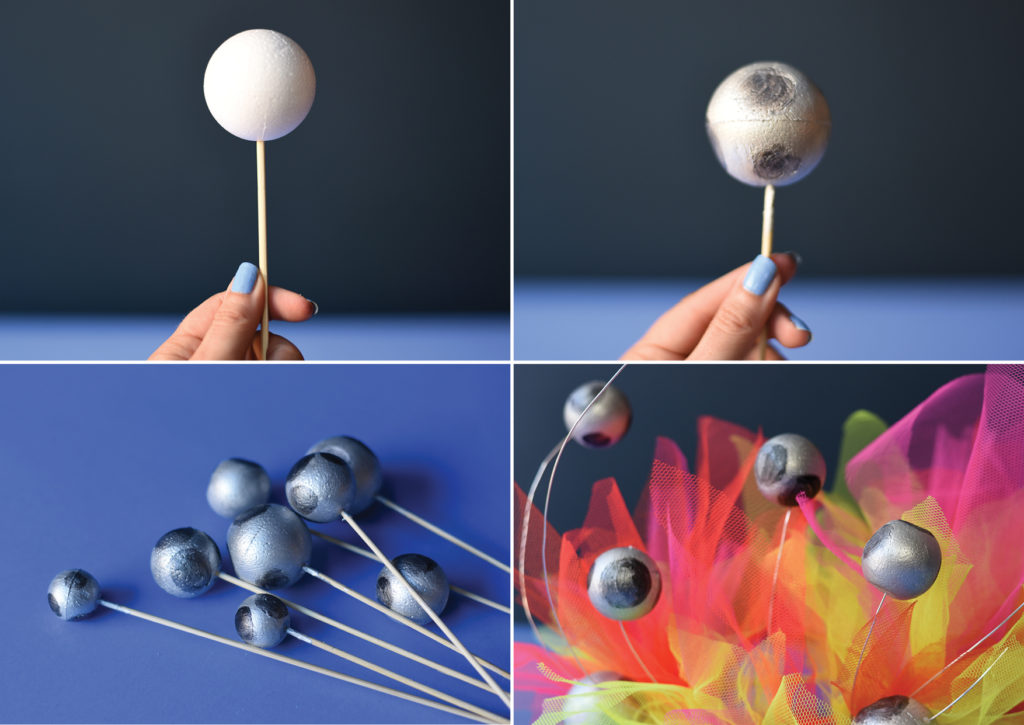 There aren’t many times in your life when you get to wear silver lamé but a space party is the perfect excuse! I’d love to make an adult sized version of this one because it looks like a lot of fun. 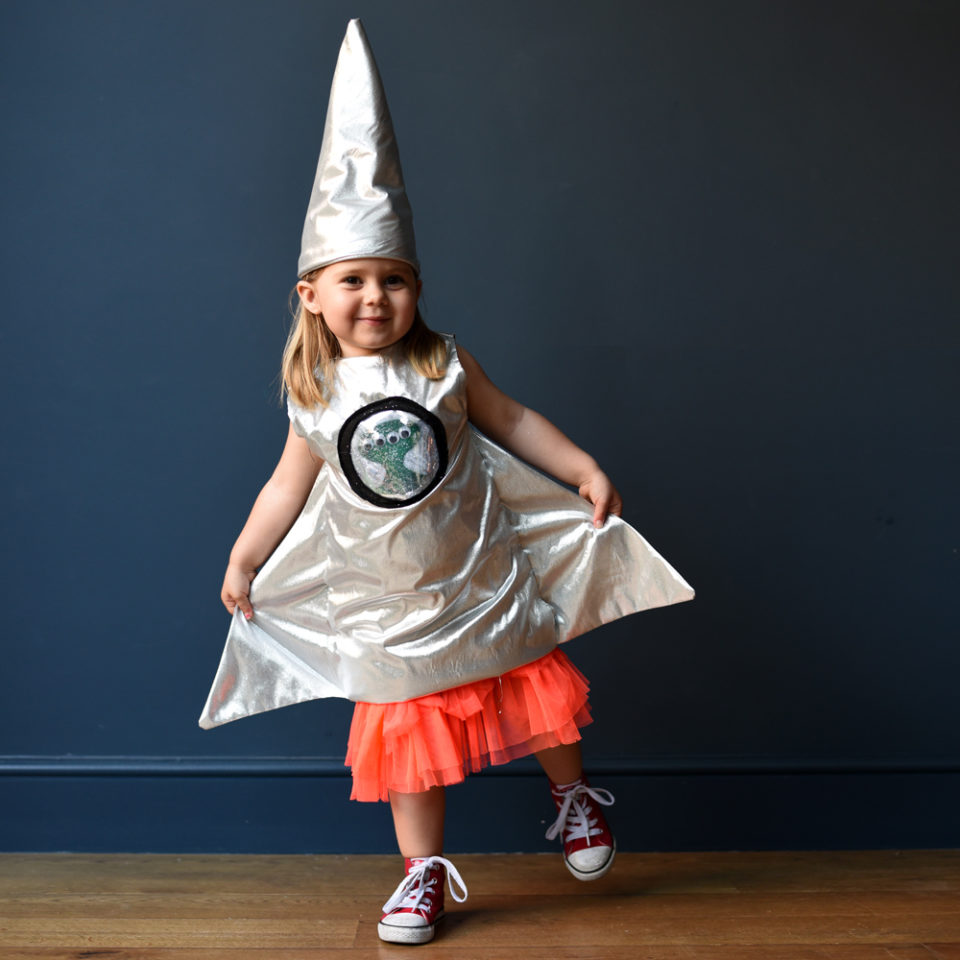 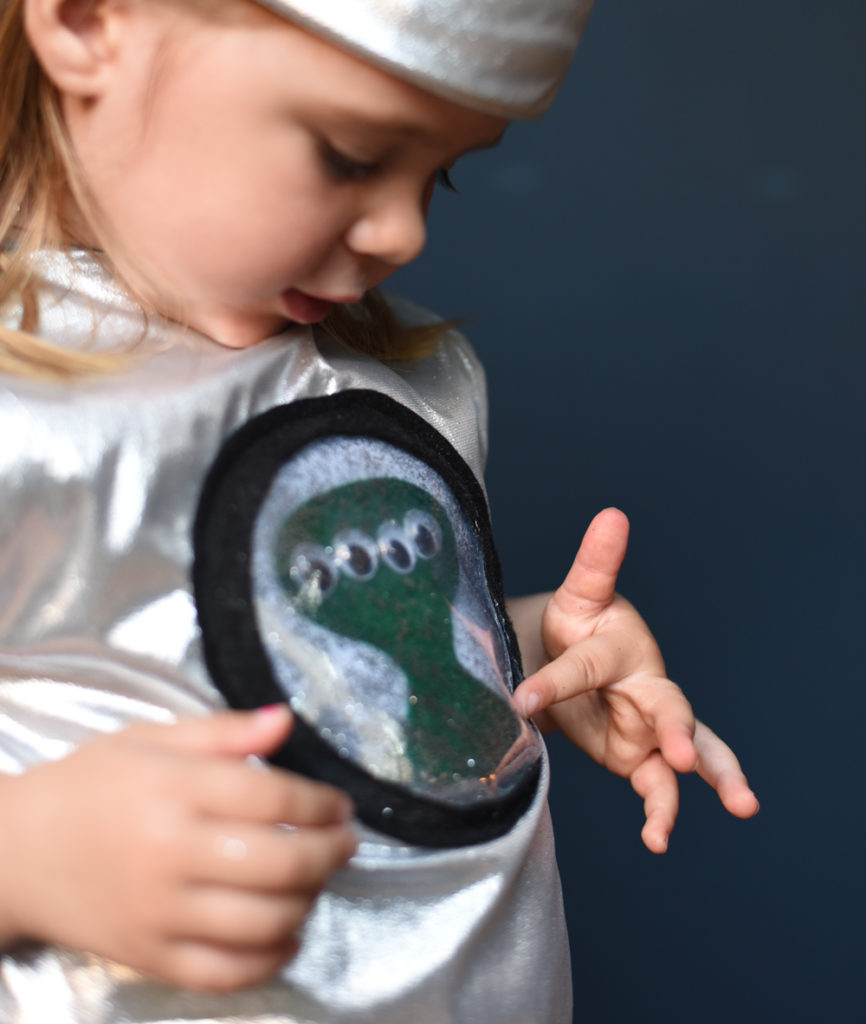 A dress to model the pattern on.
Silver lamé – I used 2 meters to make this dress for a three year old.
Cotton jersey fabric – I used this to line the dress so it wasn’t scratchy and hot.
Orange tulle – for the under skirt
White, green and black felt for the alien
Googly eyes for the alien
Some clear plastic for his window – you could get this from a plastic sleeve if you don’t want to buy loads of plastic.
Some glitter for the alien’s window
Glue to stick him together. 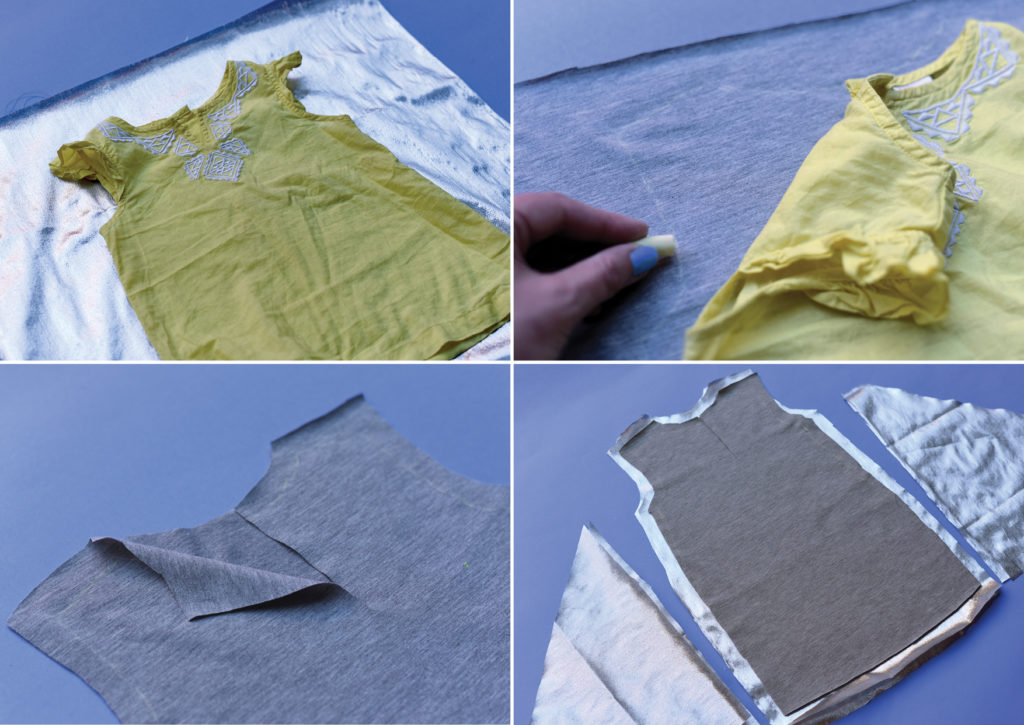 I haven’t used a pattern to make this dress, I just traced around one of my daughter’s dresses that is a similar shape. I made it slightly larger to account for mistakes. Things always turn out smaller than you think they will be!

To make the dress: 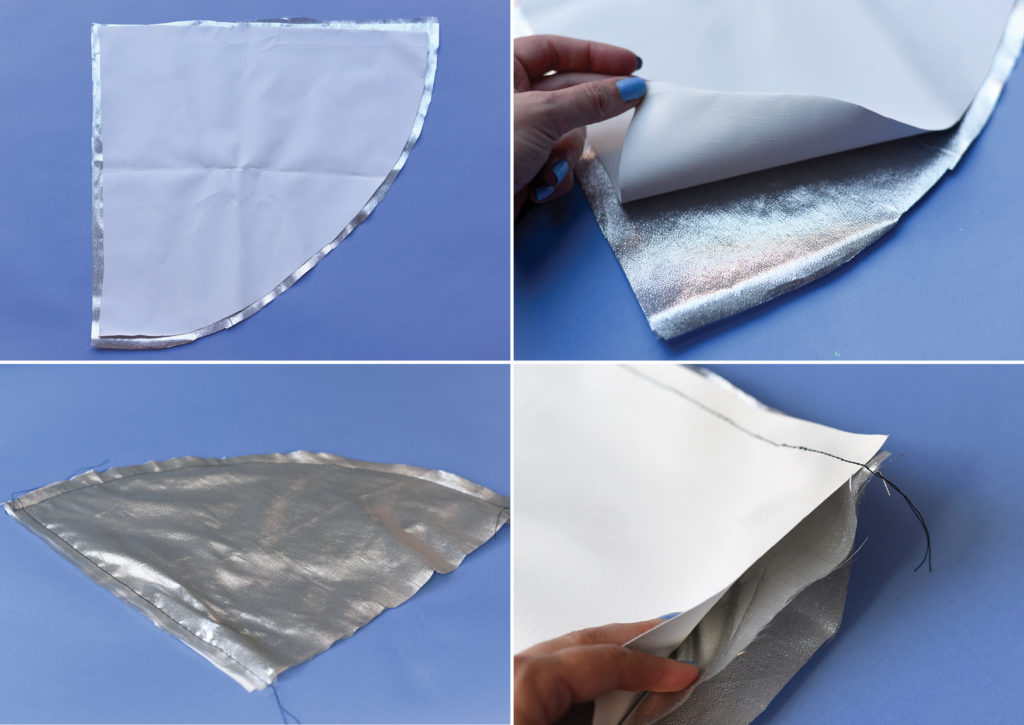 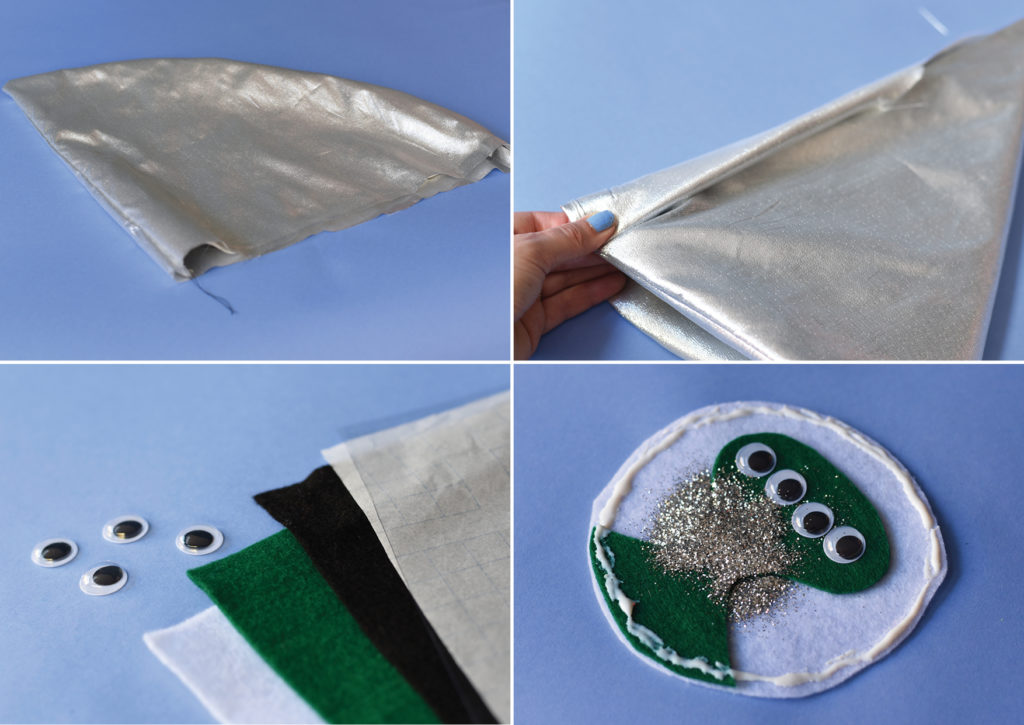 To make the alien:

Let me know how you go with your creations! I’d love to see them. And look out for me at Camp Bestival. I’ll be dancing to Bananarama dressed as The Big Bang.

For more tips for festivalling with kids, take a look at my What To Pack list for a concise guide of what to bring, and Peckham Mama’s list of survival tips.

If you’re looking for more fancy dress ideas check out my Terrors of London and our crafty minx tag for more crafty posts.