Posted at 07:55h in CRAFT by Emma Scott-Child
Share

Here’s a way to make an easy DIY bean bag using just one piece of fabric. Perfect for a sewing novice, and ideal for using up extra fabric that you might have lying around.

A little while ago we said goodbye to our trusty old giant bean bag because it had started shedding beans. I wanted to turn one giant beanbag into two little ones for the kids’ book corner. (And if I’m totally honest – to entice their snotty faces off my nice new sofa).

I’m not the best seamstress. What I lack in skill, I usually make up for with enthusiasm (adding decorations to cover my terrible seams). But this doesn’t work if you’re creating something with minimal decoration that needs to stay together to avoid a huge mess. So after staring at a pyramid teabag for a while, I thought of a way to make a 3D shape using just one piece of fabric and the result is this pyramid shaped bean bag.

You start with a normal flat cushion shape, then once you have a sack, join the last edge so it is perpendicular to the seam at the other end. This will form a pyramid shape, exactly like a pyramid teabag.

This image gives you a good idea of the construction… 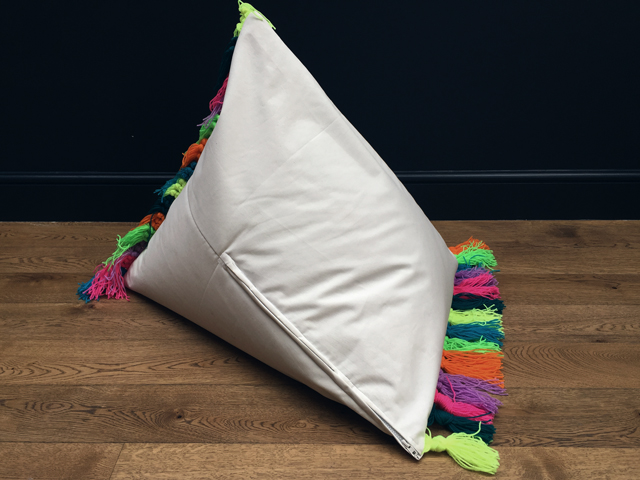 I made a sealed bean bag first with calico and sealed all the beans in, then I made a cover that I can take off and wash if I need to. You do need to sew in a zip, and you’ll need a special foot for this, but it’s much simpler to do than you might think.

Another option for the insert, if you’re not keen on getting involved in bean bag balls, is to fill it with your extra duvets. Like I did with this pouf. Storage and comfort! 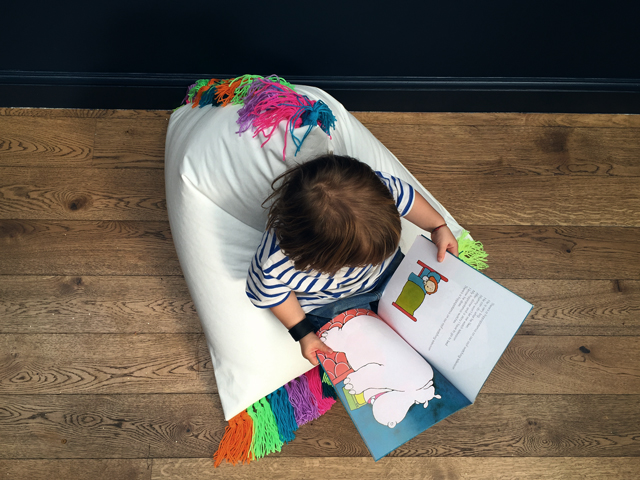 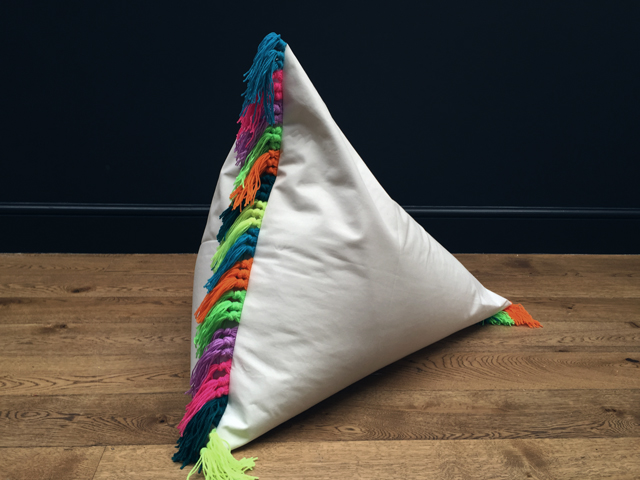 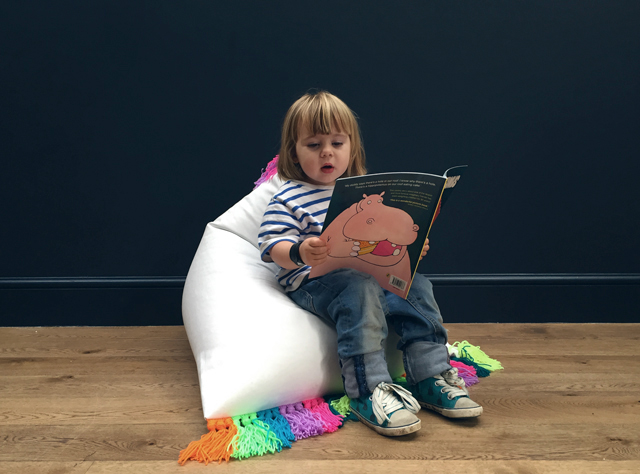 1. Fabric for the insert – My fabric was 75cm x 150cm for a small beanbag. If you want a different size, use a ratio of 1:2 so when you fold the fabric in half, you get a square. I used regular calico.

2. Fabric for the cover – The same size as the insert. I used fabric from Ikea that was made for roller blinds. It looks like canvas on the outside, but it has a rubber backing which will help it hold together and it’s wipe clean. Great for something that lives on the floor.

3. A zip – I used a chunky plastic zip, 45cm long. It needs to be at least half the width of the seam it’s on to fit the insert into the cover with all the beans in it.

TO MAKE THE INSERT:

1. Take the insert fabric and fold it in half. You’ll end up with a square.

2. Sew the edges together to form a tube.

3. Sew the end up to form a sack, like you would for a normal cushion.

4. Now take the open end, and rather than sewing it up to form a normal flat cushion shape, join the edge so it is perpendicular to the seam at the other end to form the pyramid shape.

5. Don’t sew it all the way up, leave a hole about 20cm long to fill you beans through.

6. Fill it with beans – use fewer that you’d think so it’s not too stiff – then sew up the hole so they are sealed in.

TO MAKE THE TASSELS: 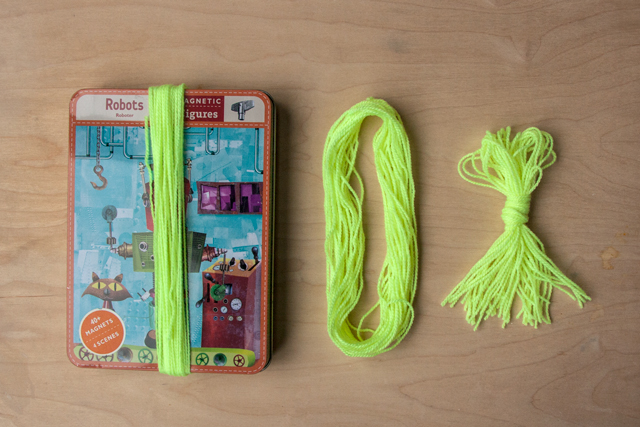 1. Use a book or a box to wind the yarn around. I used a tin that was 20cm wide and wound it around about 20 times.

2. Take the yarn off the box, carefully keeping it in a bunch and tie it in a knot. Make sure the knot is slightly off centre, the longer end will become the tassel. The shorter end will be sewn into the cover.

3. Cut the strands at one end to make the shaggy end of the tassel.

TO MAKE THE COVER:

Follow the same process as the insert, adding the zip and the tassels.

1. Start with the seam that has the zip. Fold the fabric in half, inside out and sew along the edges to make a tube, stopping where the zip will start. 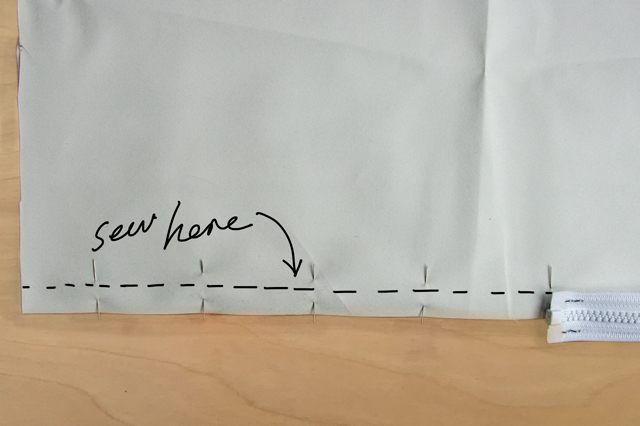 2. To finish that seam with the zip, fold in the edges and pin in the zip. The folded fabric will form flaps that will cover the zip once it is done. 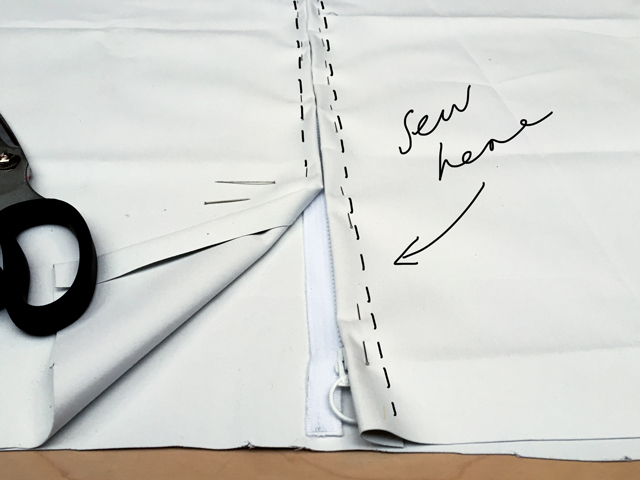 3. Sew the edges of the zip. Keep the zip closed the whole time you sew it. You will need a zipper foot to do this. 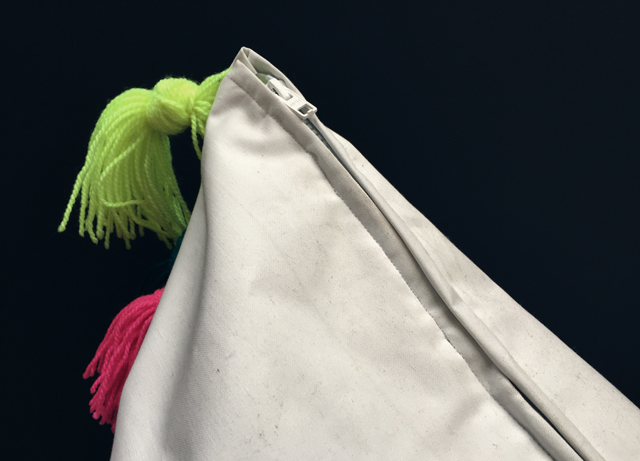 4. Sew the end seam to form a sack. Bring it together so that the zip runs down the side and opens at the corner (Rather than the zip ending up in the centre of the panel). Before you sew, pin the tassels into the end seam. 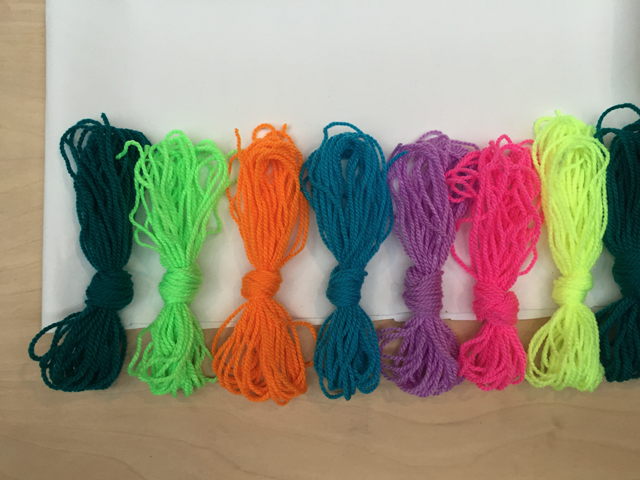 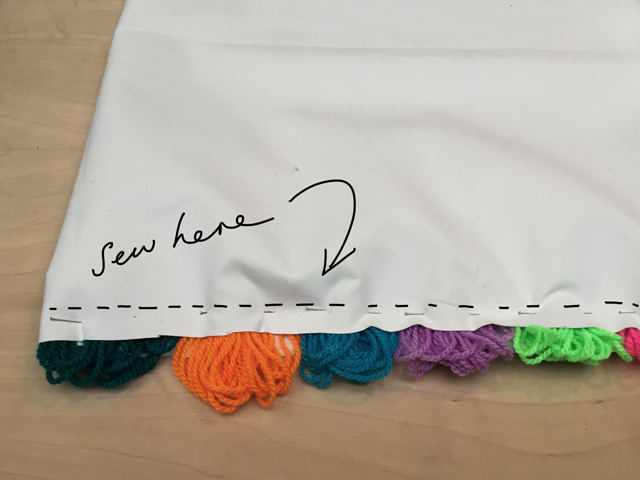 5. Now sew the final seam, perpendicular to the edge at the other end, adding tassels once again. The seam that the zip is sewn into will end up halfway along the new edge and the pyramid shape will form. 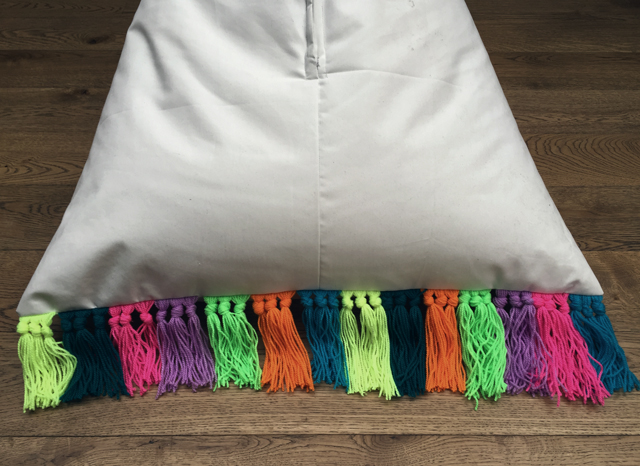 6. Now sort out your tassels. I untied the big knots, then re-tied them into three smaller bunches. This was probably the most time consuming part of the whole thing. But oddly relaxing. 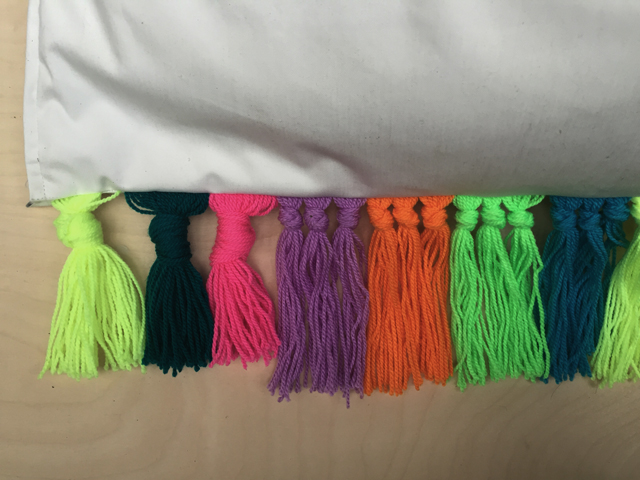 7. I trimmed the ends a little so they are neat. I was going to cut them down so they were much shorter, but they look pretty fun as a sort of crazy mohawk. 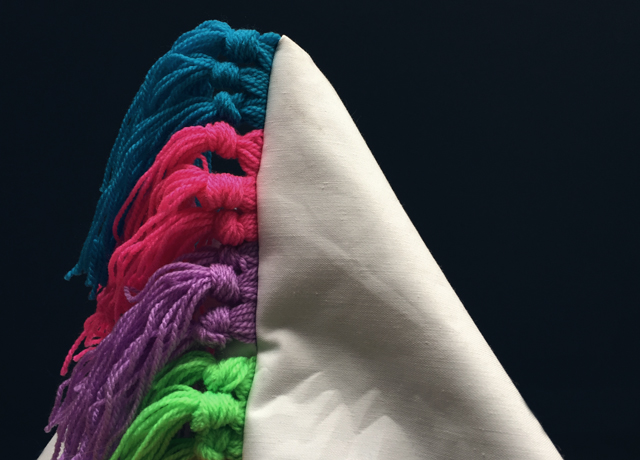 8. Now carefully add your insert with the beans in it into the cover. And you have a beanbag! 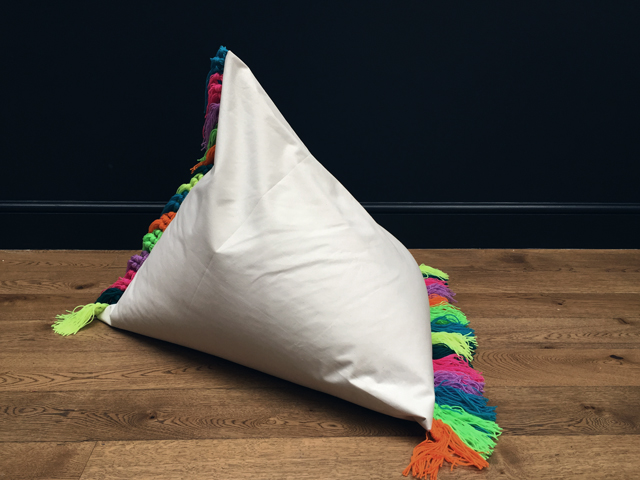 Just a side note…
Clearing out the old beanbag didn’t quite go to plan and looks like a total nightmare, see below… but I urge you – if you ever get the chance to spend the afternoon rolling around in beanbag balls with two kids, you should do it. Best afternoon ever. 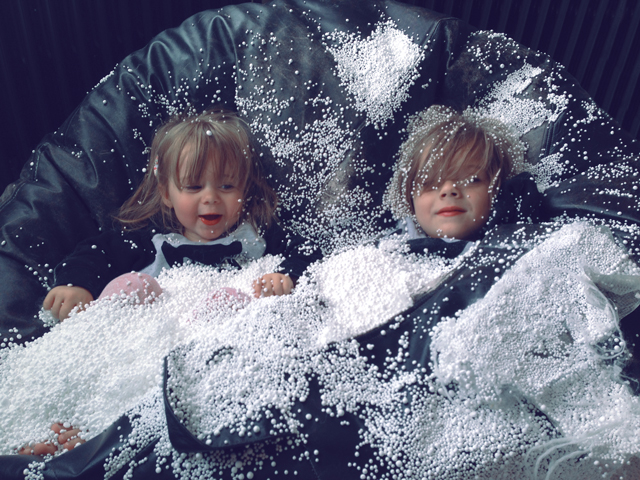 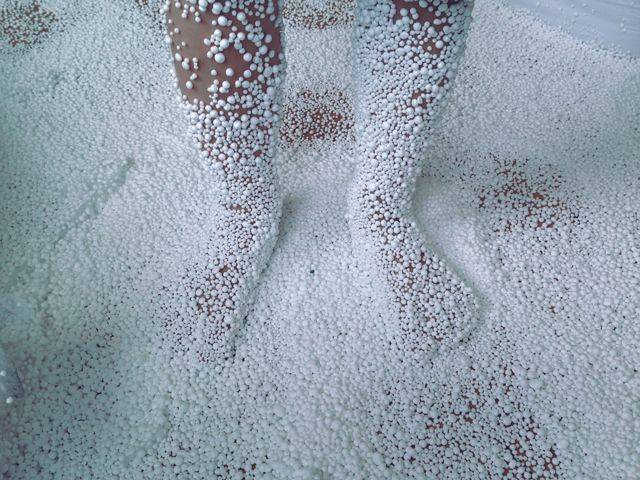 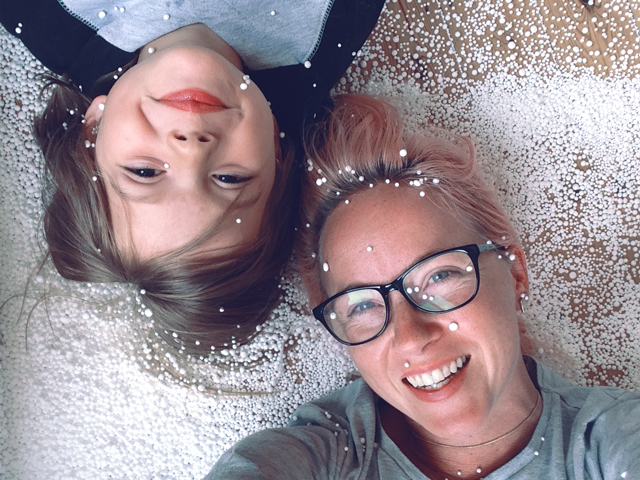 Special thanks goes to sewing wizard and nanny extraordinaire Lotte, who helped me out when my sewing machine decided to call it quits. XOXOXO