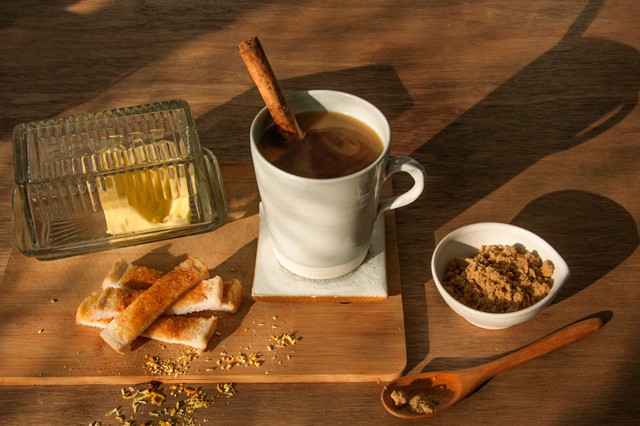 Posted at 17:00h in COCKTAILS by Emma Scott-Child
Share

Here in London it is freezing. Literally FREEZING. Below zero.

As an Australian, no matter how long I live here, I will not be prepared for the winter. I will always dress like a scarecrow, because I have no idea how to layer clothing and as much as I like the idea of a bracing British winter walk, I always get 10 minutes in and think, why the hell are we outside? Is this meant to be fun?

Well I’ve found the answer to my troubles and it contains rum, butter and a lot of sugar. Hot cocktails seem to be doing the rounds this winter and this one is a fantastic afternoon pick-me-up that would do nicely in a flask on a long walk. And if it were socially acceptable (and not five million calories) I’d have it for breakfast every day between January and March, just to get through the winter.

If you’re trying to be healthy, step away now. As an extra treat, add some cinnamon toast ‘soldiers’ and dunk those babies into the sweet buttery goodness. **Cue Homer Simpson drool noise**

A pinch of grated nutmeg

A shot of spiced rum (I used Sailor Jerry)

Makes one drink, but the tea infuser of spices could be used in two drinks before it loses its flavour.

To make the cocktail:

1. Put the kettle on

2. Put the grated lemon and orange rind, cloves and nutmeg in a tea infuser. Then place it in your mug along with the cinnamon, sugar and rum. Pour in boiling water and leave to infuse for about 3 minutes.

3. Once infused, remove the spices and scoop in the butter. It will look pretty gross and snotty, so whisk it with a teaspoon until the butter has completely melted. Enjoy!

Butter some white toast and sprinkle a mixture of light muscovado sugar and ground cinnamon onto it. Then cut into soldiers and dunk!