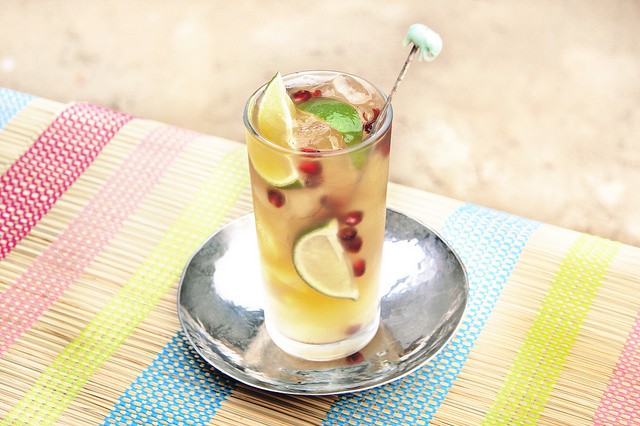 Posted at 16:03h in ARCHIVE by Emma Scott-Child
Share

We had this drink at our wedding in Sri Lanka, where it was crudely named ‘The Arrack Attack’. Arrack is a sort of blanket term meaning ‘hard liquor’ and the only liquor available was some incredibly dodgy rum. The guys behind the bar turned all this around with the addition of ginger beer and lime creating a flavour punch that stylishly complemented a sunset wedding – and was the main reason our guests ended up in the ocean, singing sea shanties in the wee hours… including me, with my wedding dress tied up around my waist. This is a slightly more elegant version using Sailor Jerry rum and adding pomegranate seeds for a juicy kick.

Pour the rum over ice, squeeze in some lime juice, then throw in the wedges of lime. top up with ginger beer then sprinkle some pomegranate seeds on top for an extra tart kick.