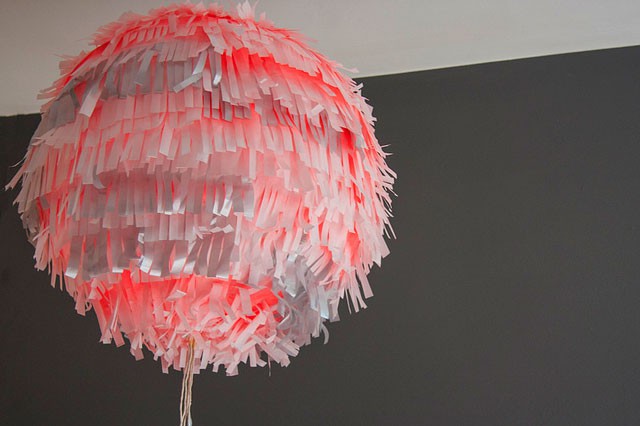 Posted at 11:14h in CRAFT, PARTIES by Emma Scott-Child
Share

I was recently having dinner with a group of friends from different countries who didn’t know each other particularly well. One of the girls said to another, “Oh! You’re the girl who had the traditional Swedish wedding piñata. I heard all about it”. The Swede had to concede that the piñata was not a Swedish wedding tradition but it sounded like so much fun that we all agreed that every wedding should have one. Especially if guests from different countries can create a talking point by adding traditional sweets from their culture (Caramello Koalas, Daim Bars, Pineapple chunks etc.). This could also be a great hen do piñata if you fill it with these.

I used the same technique as I did before christmas with the giant mistletoe piñata by using a paper lampshade as the base but adding a spray paint step to create a gradiated effect on the fringing and some fancy tassels. 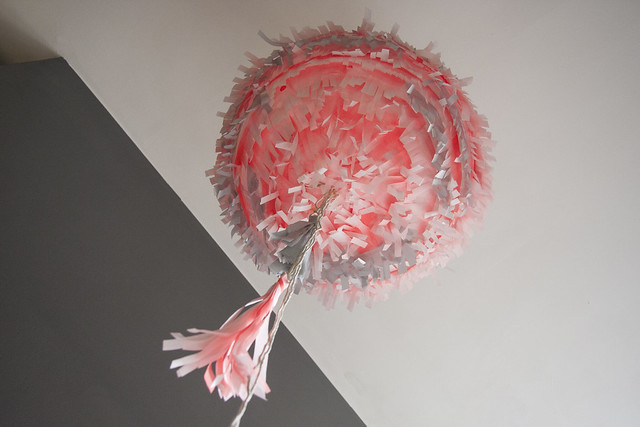 The result looks too good to smash, but I imagine after drinking prosecco on a lawn in uncomfortable shoes all afternoon I’d be ready to give it a go.

First cut a circle out of tissue paper that is slightly bigger than the hole in the bottom of the lampshade.

Put it inside the flat paper lampshade. Tape it from the outside so things don’t fall out when you fill it up with sweets.

‘Inflate’ the lampshade so it becomes a ball. Be careful that the wire support doesn’t tear the paper at the bottom of the ball.

Take each sheet of tissue paper and spray four stripes horizontally making sure the two edge stripes go off the paper at the edge. 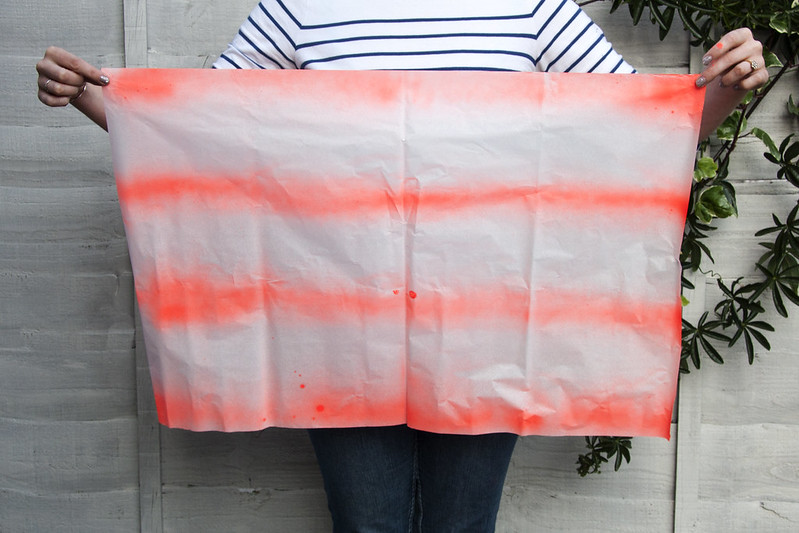 Do this outside because the fumes are pretty intense. It is IMPOSSIBLE to do this on a windy day.

Hang the tissue to dry on a clothes rack for about ten minutes.

Cut your tissue paper into 6 long strips. The colour should fade across each strip from dark to light. The dark edge will be the top of the fringe.

Fold the strips into manageable sizes then cut the fringing along the white edge. (Have a look at the video to see what I mean.)

You will need three styles of fringing. Short fringes for the top and bottom of the ball where the curve of the spiral is sharper, long fringing for around the middle and short fringing with a curved edge around the top to finish off the top of the ball.

Mix some PVA glue with a tiny amount of water to make it easy to paint with.

Now take three pieces of fringing. Turn them over and paint a stripe of glue along the top edge.

With one finger, touch the corner of the fringe with the glue on it. Pick it up and stick it to the bottom of the ball curving it around the hole. Now stick the next one alongside it carrying the edge on from where the last one ends.

Work your way around in a spiral that keeps going and going all the way around the ball. Each row of the spiral should be 3cm from the last.

I added in a few pieces of silver fringing as well to keep if interesting.

When you get to the top of the ball, use the small pieces with the curved top edges to finish it off neatly. 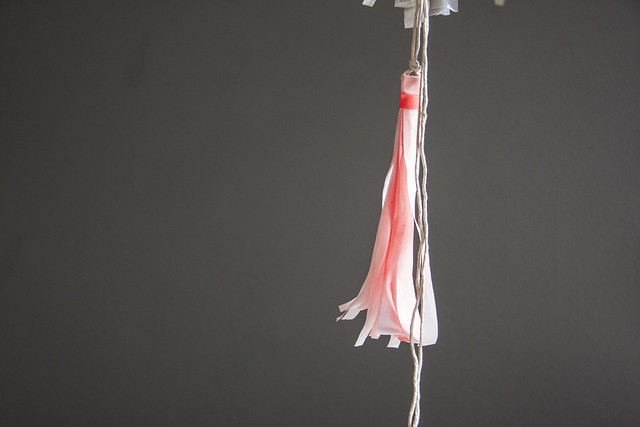 Cut a piece the size of two panels of a piece of folded tissue paper. Fold the piece in half and press the crease down to make a nice sharp fold and turn the fold towards you.

Cut from the fold to the doubled edge in 1cm wide strips so you end up with lots of thin doubled over strips.

Hang them over your finger in a bunch and tie them together with string. Keep the string long to tie it to the pinata.

Now take one strip out and use it to finish off the tassel. Tape it to the top of the tassel perpendicular to the bunch. Now wrap it around and around to cover the tape.

Put a dollop of glue on the end to stick it down.

Make a small slit in the tissue paper that covers the hole in the bottom of the ball. Tie the tassel string to the wire support inside.

Use string or ribbon to hang the pinata from a high hook.

Fill it with sweets and SMASH!