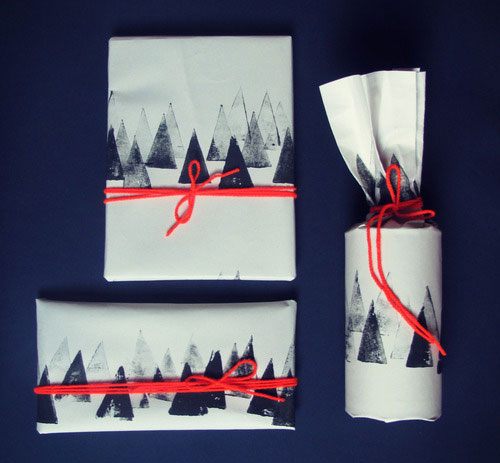 Posted at 10:37h in ARCHIVE, CHRISTMAS by Emma Scott-Child
Share

I usually have an aversion to all things involving potatoes and prints – largely because no matter how deft you are at carving, they tend to look a bit Mister Maker. The trick is to keep things simple. I made this gift wrap by cutting potatoes into basic triangle shapes to represent fir trees and created a snowy landscape by printing them in long lines with the faded prints a little higher on the page to appear as though they are disappearing into the mist.

It’s also super cheap: you can make 30 metres of wrapping paper for around £10. Bargain!

Blot the potatoes on some paper towel after cutting so they aren’t too juicy. If they are too wet the paint will smudge.

You can stamp the potato into the paint on the plate, but you’ll get a better result by painting it as there won’t be too much paint seeping at the sides.

Print the faded triangles slightly higher than the darker ones to appear as if they are disappearing into the mist.

Add some contrasting ribbon or wool to brighten it up.

Watch the video to see how I did it.