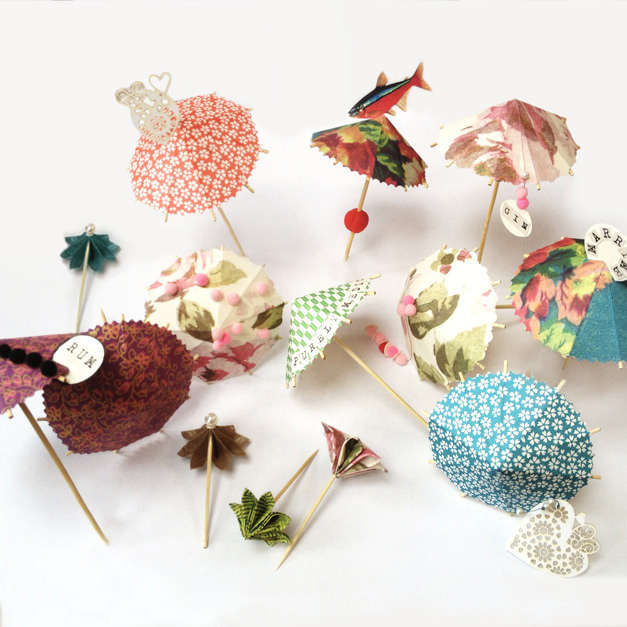 Posted at 12:37h in CRAFT, PARTIES by Ruth Howes
Share

Please be assured that the irony of the idea I am about to share is NOT lost on me when you consider that I’m often muttering and huffing that ‘I never have enough time’.

I’m ready for the backlash. If I have time to fuss and preen over these then, yes, I actually must have enough time. In fact so much time, that it might be time that I get a proper job.

But, parking this notion for a moment, and turning the key in the lock of a mind palace of uber-frivolousness, how about homemade cocktail umbrellas? Now these little show-offs have lots of jolly things going for them but first, and for balance, there are serious things they won’t do. They will not further mankind… not really. Each is a slightly embarrassing imbalance of something carefully conceived, delicately executed and purposefully styled up, but is, ultimately a disposable drinks accessory. Let’s be frank, they don’t help get the drink into your mouth any better either – indeed, quite the opposite.

And so to things these perky brollies do do. They’re going to lend some pretty serious creative boom to your drinks party (let’s clench our bottoms and go as far as to call them ‘game changing’). Selected appropriately, they help avoid the frightful moment when one similar coloured cocktail is placed down next to another; the very stuff of drink confusion nightmares. Employ a bespoke version to send a message to the drink’s recipient and blow their mind with your ingenuity, originality and thoughtfulness (see my marriage proposal brolly). But do please be wary of the equal possibility of them obliviously discarding said umbrella (and crashingly your love) in their haste to get bevvied up.

With these crafty delights, I have my tongue in my cheek. Being serious, they are from a world of effort that takes some getting used to. But once there, what’s not to like?

1. Get yourself some cocktail recipes. 2. Hang ten in your craft den. 3. Reappear rocking the most handsome tray of drinks.