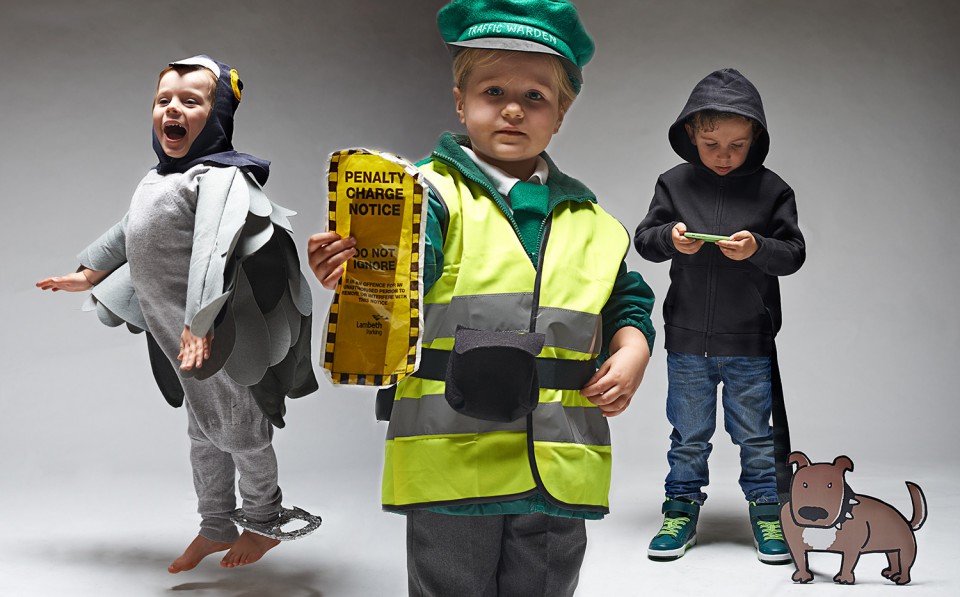 24 Oct THE TERRORS OF LONDON – HALLOWEEN IN THE CAPITAL

Posted at 09:53h in COSTUMES, HALLOWEEN by Emma Scott-Child
Share

I’m going to go out there and say that Halloween is better than Christmas because it involves my two favourite things: dressing my kids in inappropriate costumes and eating junk food. “But it’s so American!” I hear people say. They are seriously missing out because traipsing around your neighbourhood, begging for sweets in ridiculous clothing is actually pretty fun. Even if you’re in England where there aren’t too many pumpkins in windows.

So here are seven very English costumes. No Disney princesses or super heroes here, only the scariest, creepiest, most fearsome characters you’ll ever meet here on the mean streets of London. 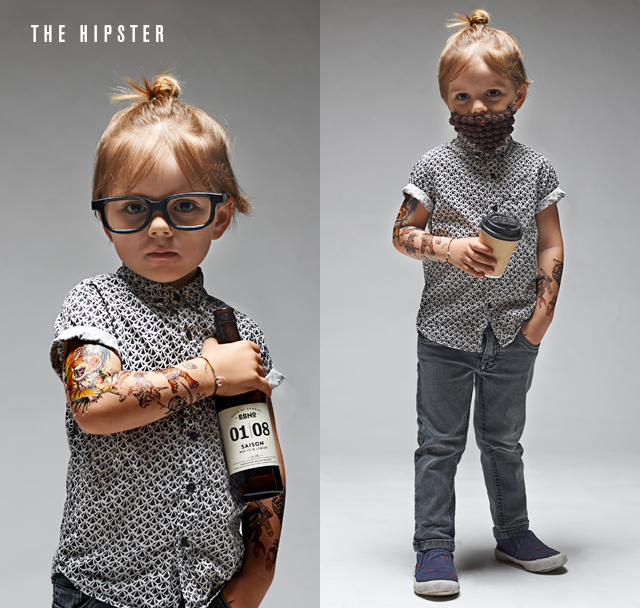 You’ll find him running red lights on his fixie or lurking in a coffee shop on his mac, ready to gentrify your neighbourhood with a micro-brewery the moment your back is turned. He carries a flat white in the morning and a craft beer in the afternoon. His vintage frames, beard and man bun are essential to his look. 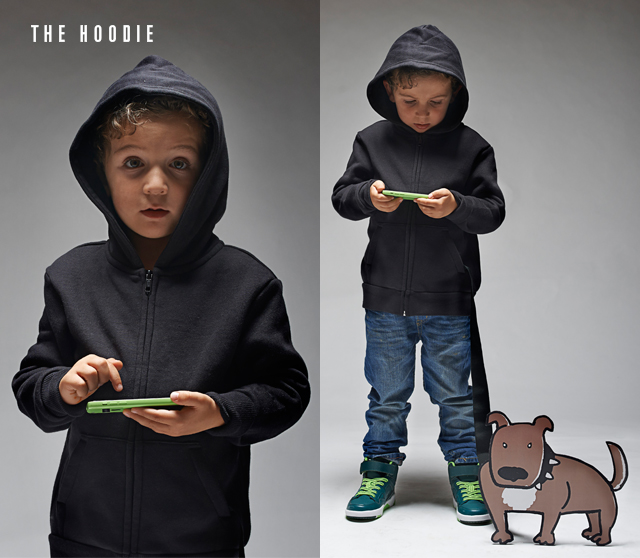 You’ll find him outside JD Sports just chillin’ with his staffie, Tyson. Don’t disrespect him. Don’t look at him. Pretend you can’t even see him. And whatever you do don’t distract him while he plays Candy Crush on his phone. 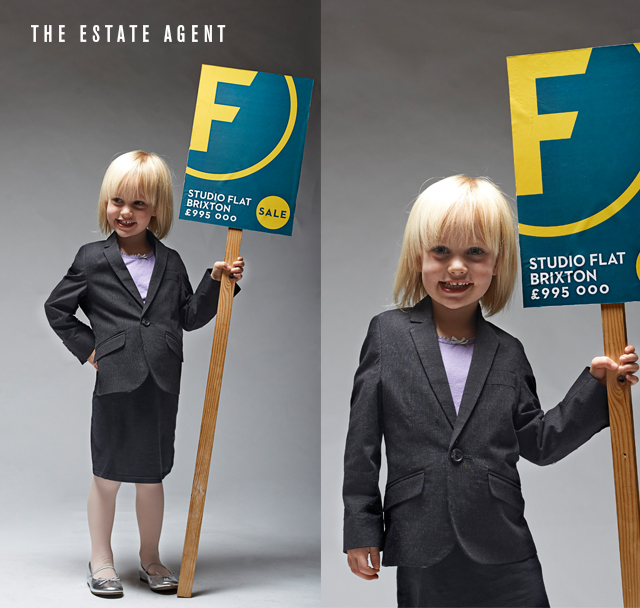 Although she’s smiling, she’s possibly the most treacherous of all the terrors, The Estate Agent. She can be found driving up property prices while whizzing around in her little car using words like ‘potential’ and ‘character’. She’ll take you on her tour of terror to Brixton because it’s the new Shoreditch, then to West Norwood because it has an artisanal bread shop now, then to Penge because it’s the new West Norwood, then finally to Croydon to show you a flat you can afford.

Winnie wears a jacket and shoes from John Lewis, a customised boob tube as a skirt, her own top and she carries a faux Foxtons sign. 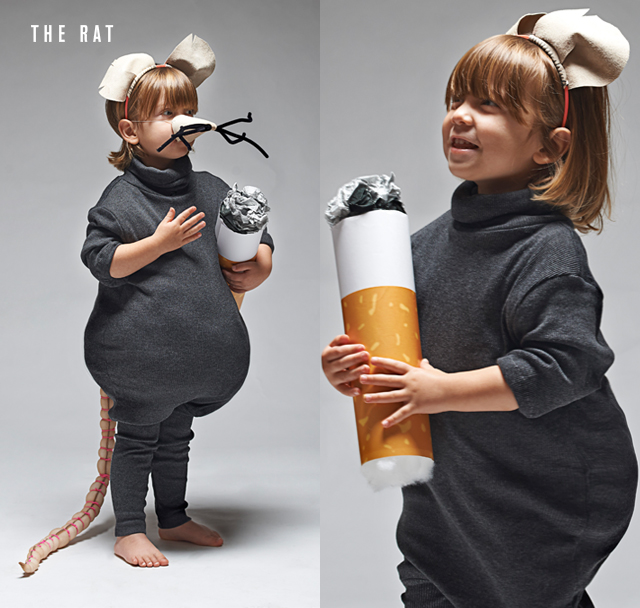 Claudia wears: Rat suit made from a customised ASOS jumper, leather handmade rat ears and nose, tail made from tights and wool. She carries a ciggie butt made of paper and toy stuffing. 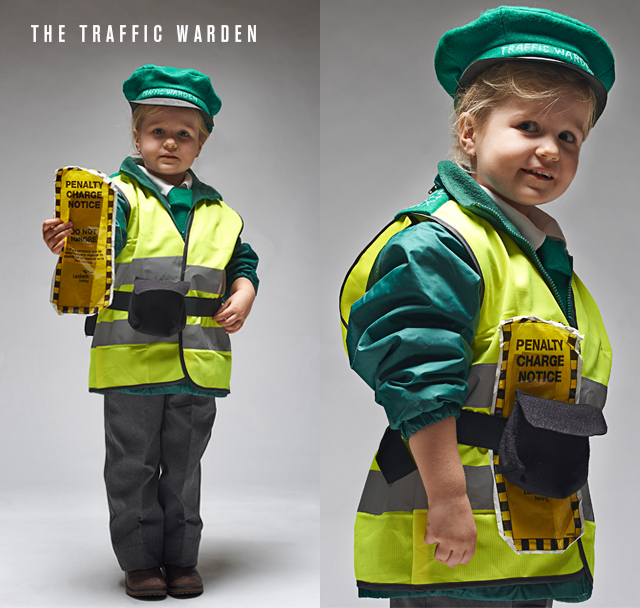 You’ll find her hiding out behind a hedge waiting for her moment to book you just as you come back from your doctor’s appointment. She doesn’t want to talk about it, she’s just doing her job, she’s already printed the ticket, you’ll have to take it up with Lambeth council. 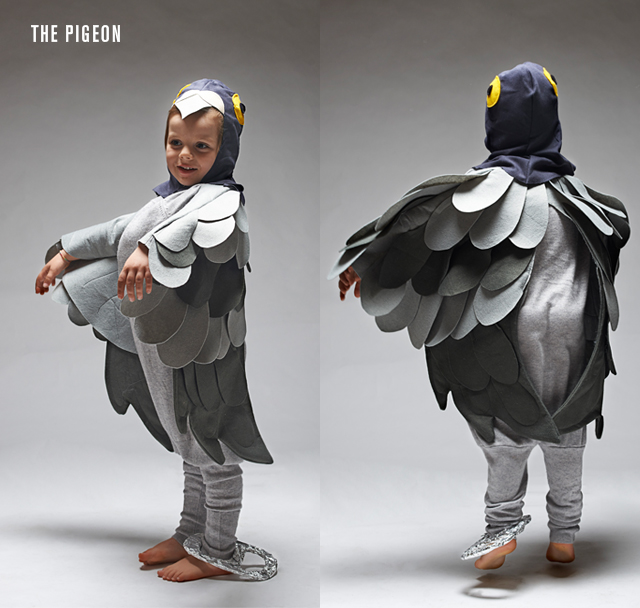 You’ll find him under your feet outside the tube with a ring-pull around his ankle, or pecking at some spew outside the pub. He doesn’t care if you kick him, he’s got other things to do. He’s off to Whitehall to poo on Churchill’s head. 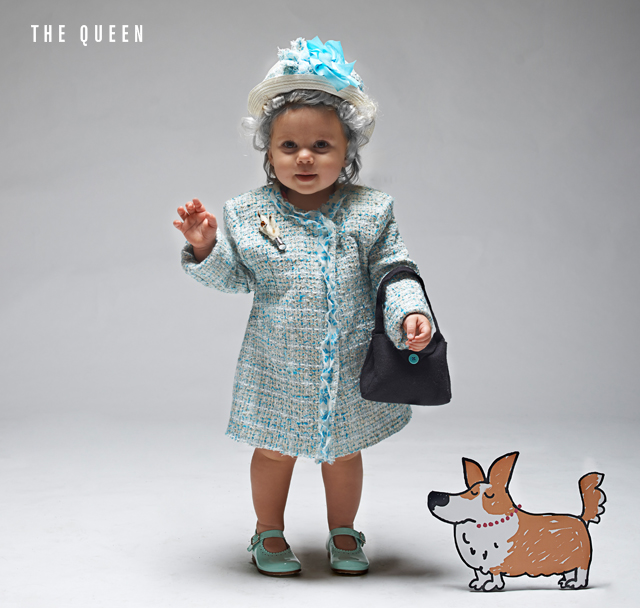 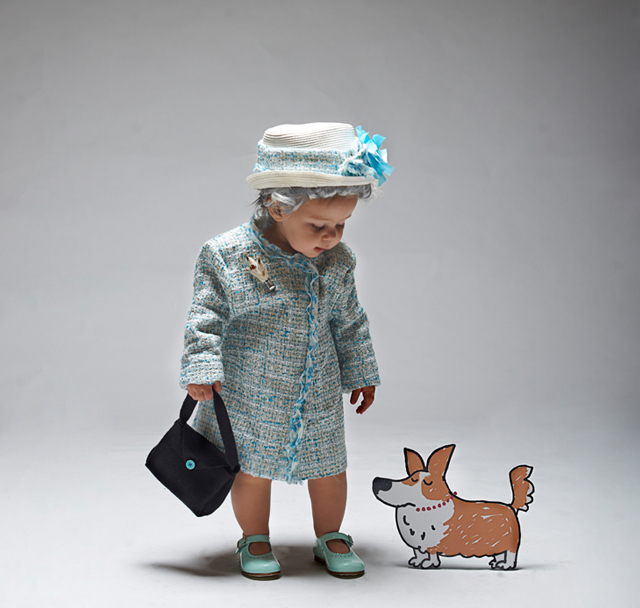 The only one that you won’t find out on the streets, but she’s fearsome all the same. You’ll find her majesty in Buckinghuge Palace, counting all her money while feeding her corgis non-organic dog snacks just to annoy Prince Charles.

Frida wears: Hat and shoes from Panache Kids, a £5 charity shop blazer (customised to baby size by my clever friend Lotte), vintage grouse foot brooch, handmade felt handbag (concealed flask of gin optional) and takes her cardboard corgi with her wherever she goes.