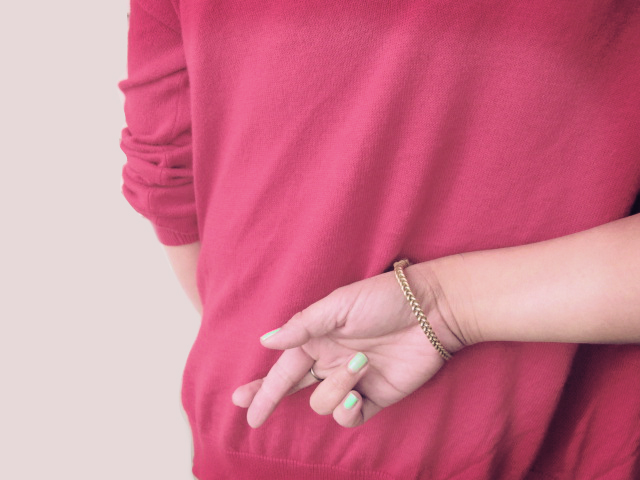 18 Sep THERE’S NOTHING WRONG WITH A WHITE LIE, RIGHT?!?

Posted at 20:49h in ARCHIVE by Selina Altomonte
Share

Not so long ago, I received a message from a girlfriend that almost made me spit out my tea: “I hope you don’t mind, but I told John* I’ve been with you when I’ve been over at Ben’s*.” John being her soon-to-be-ex; Ben being her lover. I was a little bit appalled – not so much because she was lying to her partner, but because she assumed I would too.

Sure, I lie to my husband all the time – but they’re just white lies. And that’s a completely different category of lying, right?

Take this typical exchange: “I haven’t seen that bag/top/bit of vintage kitchenalia before…” And my standard retort (sounding offended): “What? I’ve had this for ages!” The truth is, of course, that it is another new bag, or top, or vintage silver serving spoon… but if it’s been stashed away for months then technically I have had it for ages…

My little fibs trip off the tongue; they’re harmless. A victimless non-crime. And we all do it. To our boss: “It’s almost ready.” (Err, I haven’t started.) To our mother-in-law: “It’s delicious.” (Pass the salt!) To our friends: “I’ve double-booked.” (Got a date with a Game of Thrones.) You can’t please everybody – including yourself – without occasionally bending the truth.

And because I want to justify my dossier of deceits, I asked some experts to weigh in on the matter. Ian Leslie, author of Born Liars, offered some comfort: “Any lie I tell I can pretty much justify as being okay,” he tells me. “Maybe I think I’m saving someone from being upset, or making a story more interesting. My definition of a white lie is the same as everyone else’s: ‘I tell white lies; he is a liar’.”

Besides, anyone who claims they never lie is lying. Back in 2002, American psychologist Robert Feldman filmed students meeting people for the first time and caught his subjects telling an average of three lies every 10 minutes – if it’s typical to lie that much to a stranger, I shudder to think how much I do it to people I’m close to.

Feldman also found that women are more likely to lie to make others feel better. So does this make us the mistresses of the white lie? I asked my friends for some of their go-to fibs. Sound familiar?

“Who doesn’t pretend they’re sick to get a break from work?”

“‘My phone was on silent’ is a favourite.”

“My weight and the number of men I’ve slept with are often underestimated.”

We’re all taught that honesty is the best policy, but it seems we’re opting for white lies to help navigate moral grey areas. So where do we draw the line?

“There might not be a logical answer to the question of what is a ‘white’ lie versus a ‘black’ lie,” says Leslie. “But maybe there is an emotional one for most of us. When you’re telling a lie and you get that sick feeling in your stomach… you know it’s wrong.”

Clinical psychologist Dorothy Rowe, author of Why We Lie, offers some hard truths on the matter: the garden-variety white lie is the easiest lie to tell, she says, but there are consequences. “Firstly, you’ll get caught,” she tells me. The deeper issue, however, is not that we’ll spiral into greater deceptions in our relationships, but that we’re deceiving ourselves.

“The reason we lie is to protect ourselves,” she explains. “We’re kidding ourselves that we’re being nice and kind and thoughtful – what’s really behind it is that we don’t want the person we’re lying to to stop liking us.”

But what about my harmless, if habitual, shopping lies?

“It becomes one thing after another. When you say something like, ‘I got these Jimmy Choos from a friend who bought them, but they were too small,’ you then need to remember the story of where you got those shoes. They’re complicated lies to remember,” Rowe warns. “Sensible people lie as infrequently as possible – they have more control over the events in their life; they’re less likely to be called into account.”

I want to be one of these sensible, in-control people. So I decide to go fib-free – it should be easy, no?

First up, a friend I just saw asks if I want to meet up for lunch, and even though I’m kinda talked out, I can’t say ‘no, I’m busy’, can I? I also decide it’s high time to come out of the closet about just how much stuff is in it. I fess up to my husband about my tendency to price-down, backdate or, okay, conceal purchases. He’s less than impressed, to say the least, and I wonder if I was better off telling fibs.

At this, Dorothy admits: “I don’t think it’s possible to live in society without occasionally telling a lie – but we need to be very clear in our own mind why we’re telling it.”

I also wonder whether my friend realised the position she’d put me in with her message – or whether its gravity was lost because all she had to do was hit ‘send’. “Emails remove us from the scene of the crime, as it were,” says Leslie. “There are fewer ‘tells’ to give us away, and we’re less likely to get that sick feeling when we can’t see the person to whom we’re lying. On the other hand, it makes it more difficult because digital messages never disappear. The truth is always out there, somewhere.”

What have I learned? Lie if you must – but make sure you’re a good liar. Be mindful of why you’re doing it; consider whether the truth is a better alternative; and if it isn’t, at least lie to somebody’s face.

*All names mentioned are lies.