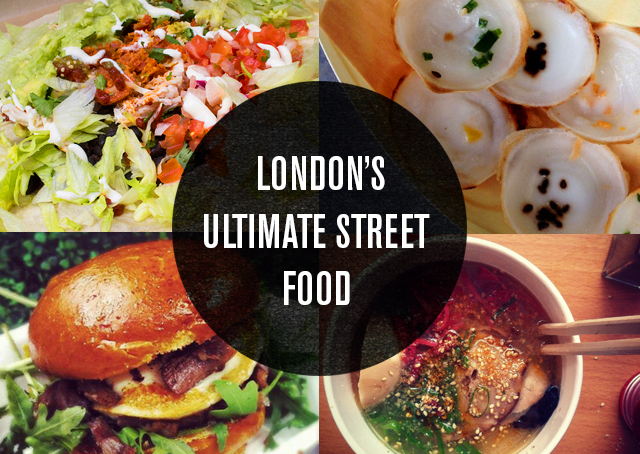 Posted at 10:37h in ARCHIVE by Selina Altomonte
Share

Any foodie worth their pulled pork knows that London’s street food scene is where to get the best taste of this city, but street food isn’t just for summertime and festival season. Sure, there’s already some serious bite to the air, but there’s something life affirming about bouncing on your feet to keep warm, tucking into a burrito partly to bring the sensation back into your hands, or huddling against the cold with fellow ramen devotees to slurp a bowl of steaming broth. Here are six of the city’s street food superstars worth heading out for rain, hail or shine…

After spending the last few months telling friends to get to Koi Ramen Bar, stat, I arrived lateish last Friday and bumped into a mate who warned me he’d ordered the last marinated egg (trust me, your ramen is incomplete without one), then found another friend and her husband at the stall, snapping up the last two serves of pork tonkotsu! Aside from getting there early (and not telling your friends about it), here is what you need to know: ramen master Ming boils pork bones for 12 hours to create the mind-blowing creamy broth for his Pure White Tonkotsu Ramen – topped with char-grilled pork belly slices, black fungus, bouncy egg noodles and spring onion, it’s a revelation. And vegans take note: Ming makes a mean Mellow Miso version that’s generous with the fried tofu and spiked with pickled carrot. Sublime stuff and it beats Bone Daddies hands down – there, I said it.

I might as well come out with it: I may have returned to in-house freelance work after maternity leave purely because of my favourite magazine’s proximity to this burrito van. Yep: babysitter hired for the day, nightmare commute on the Northern Line endured all for the promise of slow-cooked pork. Look out for the turquoise ‘Jesus’ van with the queue: and if you aren’t quick, don’t be surprised if a cardboard sign is passed down the line to let you know the Chipotle Beef has sold out. My pick is the Carnitas (the aforementioned pork, with rice and black beans, gutsy guacamole and a sweat-inducing amount of habernero sauce) or a Vegetarian with extra chorizo. Blasphemy? I think Jesus would approve.

Luardos: Mondays to Fridays at Whitecross St Market; look out for the pink ‘Mary’ van at Kings Cross, Brockley Market and out and about during festival season.

Why is Filipino food still flying under the foodie radar? A blend of South-East Asian and Spanish influences, there’s much more to this cuisine than its best-known dish, adobo: chicken stewed in a powerhouse marinade of soy, vinegar and garlic – although local cook Novavita Manabat serves up an exemplary version at her stall at Clapham’s Venn St Market. She’s on a mission to get Londoners hooked on her Filipino fare with a twist, and is becoming famous for her signature slow-cooked Beef Pares: a saucy, star-anise studded stew served on garlicky rice with green onion and a sprinkling of crispy pork crackling. You hear me? Pork crackling! And don’t forget a side of Lumpia – her pint-sized pork spring rolls that pack a punch.

THE FRENCHIE, BROADWAY MARKET AND MORE

Oh duck confit burger, where have you been all my life? This is one of the most indulgent, addictive culinary concoctions you’ll ever come across. And don’t be surprised if you discover, while waiting for the cheese  to melt over your confit duck (the assembly ritual is rather memserising), your fellow confit burger fans include girls who are making a meal out of the garçon working the grill. French boys aside, the burger really is the star. Duck confit. Caramelised onion. Crispy duck skin scratchings. Brioche. Did we mention the cheese? Try to make up your mind between smoked cheddar, raclette or blue or goat’s cheese with truffled honey. And get in line behind the girls.

As a former Sydneysider I’d come to view Thai takeaway as one of the five major food groups, so spent much of my early days in this city pining away for proper Pad Thai. I found it at Borough Market, behind a fast-moving queue of over 20, all of us getting increasingly hyped as a strategically placed cook in tropical print baseball cap casually worked the wok for the crowd. Khanom Krok serves up two dishes: spectacular Pad Thai (chicken or prawn; I vote for the latter) and the life-changing, light-as-air coconut pancakes that give this food stall its name. Join the queue now.

Close to two years on, locals are still mourning the loss of the blue caravan on Brixton Station Road where Maureen Samuel served her famous roti and Guyanese curries with a side of sagely advice. The caravan may have moved on, but the lady herself remains the undisputed roti queen of Brixton – she has been perfecting her craft since she was 13, after all. Look out for her at the street food market on Brixton Station Road (or ask a local to lead the way) – her streamlined menu includes fluffy, flaky roti, split-pea stuffed dhal puri, rich chickpeas with spinach or an earthy, unbelievably tender curry goat – and ask for lashings of her homemade scotch bonnet chilli sauce, if you dare. It all makes for one of the most comforting meals you can get in London, cooked by a bona fide Brixton food icon. Long live Guyana Roti.