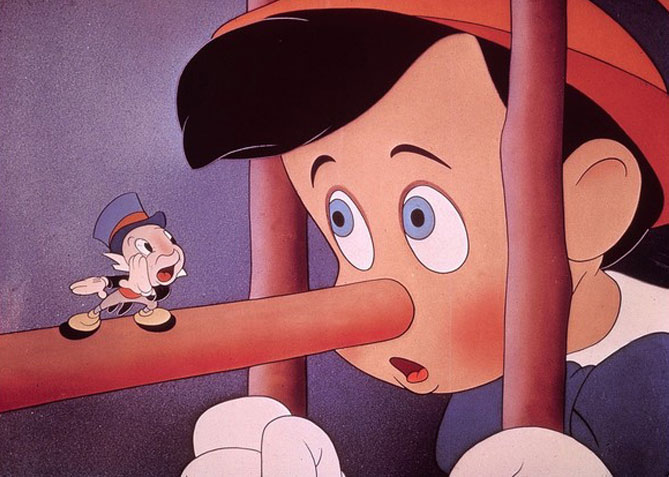 14 Apr YOU CAN’T HANDLE THE TRUTH! A DOCTOR EXPLAINS WHY KIDS LIE

Lying. We all do it, even though most of us agree that it is wrong (in principle, anyway). As far as humans go, moral hypocrisy is the standard. But what about when our offspring starts spinning yarns? We consulted Dr Jenny Allen, a Lecturer and Clinical Psychologist at the UCL Institute of Education, for her expert opinion on how to handle it when your kids double cross you…

Q. When do kids start lying?

A. Children start lying from a young age, around two or three years, but it’s more common from around age four. It’s understandable that children lie when you consider that from their point of view, it can help them avoid punishment or disapproval and let’s face it, kids receive pretty inconsistent messages about lying from the world around them which must be quite confusing. For example, how often have you heard kids being told off for truthful boasting or telling the truth if it’s considered poor manners? The good news is that while lying starts young, in general kids under five make pretty rubbish liars.

A. Like adults, children lie for a wide range of reasons such as avoiding getting into trouble or to get something they want, but may also lie for admirable reasons such protecting a friend, avoiding hurting someone’s feelings, or for simply wanting to keep social interactions harmonious.

Children’s different motivations for telling lies are reflected in terms for different types of lies:

White lies: ‘I really like the socks you got me for Christmas’ (translation: these socks suck and I hate pink) or ‘Your new haircut looks pretty’ (translation: you look like a peanut.)

Boastful white lies: ‘My daddy is at work, (true) he makes films, (true) he made Tangled (NOT TRUE) and Barbie the movie’ (NOT TRUE!!!)
Winnie, 3

These type of lies tend to drop off once kids start school and they’ve have been caught out a few times. Their peers are unlikely to indulge these in the same the way that family and friends might.

Modest lies: ‘I’m not so good at puzzles, Hungry Hippos or drawing’, when they clearly think they are awesome at it.

Modest lies are more common in teenagers who are more socially aware, but less common in young kids who tend to be quite egocentric. There are interesting cross-cultural differences regarding modesty – in China, lying about your achievements is considered polite and is viewed as more acceptable than in Western societies.

Blues lies: These are lies to protect a group, for example your class or team, and are seen as more acceptable in East Asian countries compared to Western countries, due to the high value placed on the group rather than the individual.

Self-serving lies: Lies to ‘save your own skin’, such as avoiding getting into trouble, or to get something that you want.

Malicious lies: Lies with the potential for hurting others.

…and the less science-y-sounding general bullshit type of lies:

Emma: ‘How was your second day at school?’Elliot: ‘They showed us some things like poo, then they smooshed it all over my face with some sand. Then we went on a school trip to The London Eye but there was a hippopotamus in the river trying to eat it, so it was broken and we couldn’t go on. Then a lion came out of the weird TV thing and ate everyone.’Emma: ‘Okay. Did you make any new friends?’Elliot: ‘No, they all got eaten by the lion.’
Elliot, 5

Sometimes these are admittedly quite funny and entertaining, at other times they can be kind of annoying.

The good news is that if your child does lie this is a sign that they’ve developed much-needed social and cognitive skills. For example, white lies increase from around four years of age as kids become more socially skilled and aware. For kids to be able to lie, they need to understand that what they are saying is false, intend to have the listener believe the false statement, and understand that what they say can influence the way that someone else thinks – and potentially also the way they behave (called ‘theory of mind’).

It also takes a great deal of skill to be able to tell a lie convincingly and to maintain the lie under cross-examination. Kids need to have a sophisticated ‘theory of mind’ to generate the right content for the lie, they need to be able to hold the lie in memory and simultaneously hold back on telling the truth, and they need to be able to deliver the lie confidently. This requires a high level of cognitive skill.

As kids grow older, they become more sophisticated liars and know where, when and how to tell a lie. So if your child has started to tell lies, rather than viewing this as a reflection of your failure to instil good moral values, understand that your child has actually achieved some important developmental milestones.

When should I be concerned?

First of all, remember that lying IS normal. The following questions are intended to help you consider if your child’s lying is really a problem that you may need to do something about.

How often does your child lie?

Are you reasonably confident that your child intended to tell the lies? How ‘bad’ are the lies? To what extent do they have the potential to hurt others? Do the lies ‘cover up’ activities that it’s really important for you to know about as a parent? For example, getting into trouble at school, cheating or stealing.

I’m still concerned… what can I do about it?

Put simply, lying is more likely to continue if it ‘works’. Figuring out what benefits your child gets from lying can help you to figure out the best approach to address this problem. Often kids lie to get attention from others or to avoid punishment – so do what you can to make sure this doesn’t happen.

The following helpful guidelines have been suggested by Matt Sanders, developer of the Triple P Positive Parenting Programme.

If the above pointers don’t work, you might want to grab a parenting self-help book such as Matt Sander’s Every Parent (or borrow one from a library, it’s out of print in the UK) or even discuss it with a psychologist or social worker. For young children, parenting interventions called ‘parent training’ programmes have the strongest evidence base for successfully dealing with lying and other behaviour problems, as recommended in the National Institute for Clinical Excellence (NICE) guidelines.

Jenny Allen is a Lecturer and Clinical Psychologist at the UCL Institute of Education. Jenny conducts research on the causes and treatment of child mental health problems, specifically children with behaviour problems and children with anxiety disorders. She’s very interested in how to use research on child temperament and parenting to improve current treatments for children and families. She’s also obsessed with swing dancing and is still recovering from her excitement over the recent inclusion of Australia in Eurovision.